JOHOR BARU (THE STAR/ASIA NEWS NETWORK) - Sometimes it breaks the heart of Ms Ivy Teh to see her young daughters waking up at ungodly hours just so they can reach their school in Singapore before the rush hour.

She is among scores of Malaysian parents who send their children to the Republic hoping for a better education, especially one that is conducted in English.

But she is considering sending her youngest son, who is now in kindergarten, to an international school in Johor Baru.

"I do feel heavy-hearted to see my girls waking up at 4am daily to get ready for school and had once suggested to transfer them to a school in Malaysia, but they refused," she said.

The cost of their education includes monthly expenses of S$370 in school fees for each of the girls and RM500 (S$160) each for van fare, which has increased over the years due to the hike in petrol prices and toll fare at the checkpoints.

The money spent covers books that cost about S$200 for each of the girls a year, and monthly tuition fees in Johor Baru that come up to RM1,500 each.

Ms Teh said the family did not mind paying the hefty price as they wanted the girls to study in Singapore for the emphasis on English there.

She said Malaysian parents usually choose to enrol their children in schools in Marsiling in Singapore as it is closest to the Causeway.

"(The girls) really do not mind the hectic routine and I can see that they really enjoy going to school in Singapore," she told The Star, adding that she would let them complete their secondary school studies there as well.

Ten-year-old Nurul Aleesha Amirudeen is also among those who make the daily commute between Johor Baru and Singapore.

She wakes up at 4.15am to get ready by 4.40am, when her school bus picks her up at her home in Taman Majidee.

Her mother Noraini Mokhtar, 48, said Aleesha, the youngest of her six children, preferred to study in the Republic despite the hassle. 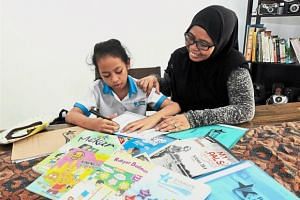 The Malaysian housewife, who married a Singaporean, said she and her family moved to Johor Baru seven years ago, and at that time, three of her children were studying in Singapore.

Ms Noraini is all too familiar with the hassle of travelling daily between the two countries, as she used to drive her children in and out for school until last year.

"Traffic during the first few years was not too bad, as we only had to leave the house at 6am, but congestion on the Causeway has gotten worse year after year, so we had to leave at 5am to arrive on time for school at 7.15am.

"Since my youngest child is the only one still in school, I decided to allow her to take the bus to school this year," she said, adding that since her children are Singaporeans, it was ideal that they completed their education there.

"Personally, I think the schools in Malaysia are generally fine, as I have a grandson in pre-school here. My husband and I have discussed the possibility of moving Aleesha here but she prefers going across the border," she added.

When contacted, Singapore's Ministry of Education declined to comment on the number of Malaysian students enrolled in Singapore schools, citing sensitivities.