PETALING JAYA (THE STAR/ASIA NEWS NETWORK, AFP) - Rapper Namewee has been remanded by the police over investigations into his controversial Like A Dog video.

The administrator of his Facebook page posted a statement Thursday (Feb 22), saying that the musician had been officially remanded.

"I am not afraid because I believe Malaysia has justice," Namewee said in an earlier Facebook post that was accompanied by a picture of him at Bukit Aman.

Police had said they were tracking down Namewee as the video allegedly offended the feelings and sensitivities of the multi-racial community in the country.

On Sunday (Feb 18), Inspector-General of Police Tan Sri Mohamad Fuzi Harun said the police had opened up investigation papers on Namewee with regard to his video clip.

Mohamad Fuzi said the case was being investigated under Section 298 of the Penal Code and Section 233 of the Communications and Multimedia Act 1998.

The dog theme in the video was made in conjunction with the Chinese Year of the Dog. 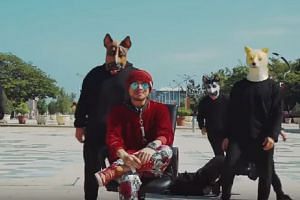 The video features the rapper, whose name is Wee Meng Chee, sitting on a chair in front of a domed building and mimicking barks of canines from around the world.

Several black-clad dancers wearing masks of dogs - an animal considered unclean in Islam - gyrate around him, with two of them mimicking a "doggy-style" sex move.

The video generated accusations that it was filmed in front of a mosque in the Malaysian administrative capital of Putrajaya.

In a YouTube video, the rapper denied having insulted Islam and said that the domed building visible in the background was the prime minister's office, not a mosque.

The police probe was launched after complaints from Muslim groups and public criticism from the deputy prime minister over the video, which has gathered more than 950,000 views on YouTube since being released on Feb 10.

Chinese New Year is a major celebration in Malaysia, where a quarter of the population are from the Chinese diaspora, but the Year of the Dog has proved sensitive. Some shops have avoided displaying canine imagery in their decorations for fear of causing offence.

Namewee has repeatedly been at the centre of controversy. In 2016, he was detained for several days for allegedly insulting Islam over a video partly filmed inside a mosque.

Malaysia generally practises a moderate form of Islam but religious tensions have escalated in recent years, with concerns growing over a rise in conservative Islamic attitudes.