KUALA LUMPUR - Malaysian police fired water cannons at protesters demanding to be let into Petaling Street where Chinatown is located during a rally in support of the government on Wednesday (Sept 16).

The police took action after the protesters tried to break through police barricades. Bottles were thrown by the protesters and some were hurt in the scuffles. Two protesters and a policeman are reported to have been injured in the clash. All three are receiving medical attention.

Federal Territory Umno Youth chief Mohd Razlan Muhammad Rafii claimed that the protesters did not know the area was out of bounds.

By evening, most of the protesters had dispersed, but a small group remained in a stand-off with police. They cleared the area about two hours later and police trucks also exited the scene.

The police maintained that they had used minimal force in their effort to prevent the protesters from entering Petaling Street.

Deputy director for commercial crimes unit Roslan Abd Wahid, who monitored the scene, said police had given ample warning and time for protesters to leave.

"This was despite the fact that this particular road was not listed in the permit given to them. We understood there were women and children in the group of protesters, so we let them sit and rest a while along Jalan Tun Tan Cheng Lock," he told reporters on Wednesday.

He also said that the authorities had no other option but to use water cannons on the protesters after they turned unruly.

"They tried to breach the barricade, and when they pushed the officers, a few policemen fell and were injured. We had to push the protesters back, so some of them further down also fell," he said.

"Protesters who fell picked up water bottles, rocks and traffic cones and threw them in our direction, but some of the items hit fellow protesters in front of us," he added.

Prime Minister Najib Razak called on the police to investigate the incident. Writing on his Twitter account, Mr Najib said the rally in KL was peaceful "except for an incident", which he added "shouldn't have happened". "All must abide by instructions," he said.

Standoff between police and protesters at rally in Malaysia

The participants of the rally, dubbed the Malay Dignity Gathering (Himpunan Maruah Melayu), had gathered at four locations - the National Mosque, Federal Territory Mosque, Putra World Trade Centre, where Umno's headquarters are located, and the Craft Complex - before marching towards Padang Merbok.

Two people were reportedly detained by police during the march along Jalan Bukit Bintang. Thousands of the protesters had earlier breached lines formed by police personnel to enter the area.

The police had also closed several roads in the city to traffic, while shops in Chinese-dominated neighbourhoods were closed.

Small groups of people started trickling in as early as 7am, as police officers stood guard nearby. As the crowds grew bigger by noon, there were reports that some members of the media were chased out by police for asking participants "provocative questions".

Participants gathering ahead of pro-Malay rally in Malaysia

The rally - organised by the National Silat Federation (Pesaka), whose head is an Umno leader, Tan Sri Mohd Ali Mohd Rustam - is meant to counter last month's huge demonstration by electoral reform group Bersih, which some Malay groups see as a bid by the Chinese to usurp political power. 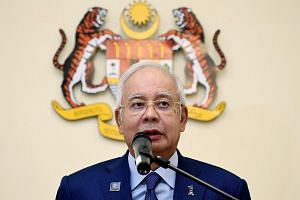 We will stop street rallies out to topple government: Najib 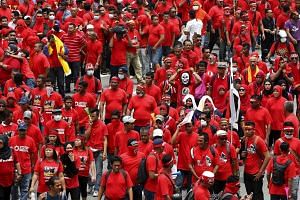 That rally demanded the resignation of  Mr Najib over financial scandals involving state investor 1Malaysia Development Berhad (1MDB). Footage of the Bersih rally, the fourth since 2007, showed some people stomping on pictures of the Prime Minister.

Among those attending Wednesday's rally was Mr Haji Nasir Rasyid, 80, a retired army officer with the rank of sergeant mayor. "I am here today to show Malay solidarity, that we are still solid. I am here today for Malay dignity, for the nation and the country."

"If Bersih can show off, we can also show off. If Bersih tries to be funny, we can do even more as I am ex army,'' said Mr Haji.

Separately, a member of the Malaysian Chinese Association's (MCA) Youth wing has lodged a police report over a banner seen at the rally, which they say is seditious. MCA Youth vice chief Nicole Wong said she saw a banner questioning the existence of vernacular schools, held by some protesters during the rally at Petaling Street.

"I was at Petaling Street around 12.30pm today and I happened to see the picture of this banner on Twitter. What has today's rally got to do with vernacular schools?" she asked. She said she hoped the police would look into the matter. The Pesaka president had said the rally on Wednesday was to remind the people to respect their leaders and was open to all races.

Organisers on Wednesday lashed out at those who have criticised the rally as being racist, claiming that defending one’s race is allowed in Islam.

“We are tolerant towards other races. We allow them to get education and earn a living here. What is wrong in being racist when we are not cruel to others?” Ketereh MP Tan Sri Annuar Musa, one of the rally organisers said. He added that rally participants had been paid to attend but said he felt that there was nothing wrong with it.

Malay Muslim NGO Coalition chairman Jamal Yunus said he would report vendors operating at Petaling Street to the Domestic Trade, Cooperatives and Consumerism Ministry, but did not provide details on why action needed to be taken against the mostly Chinese-owned vendors there.

"We will give the Ministry five days to take action against the Petaling Street vendors," he told the crowd in an effort to pacify them before they dispersed.

The rally was declared legal this week after it was initially banned by the police.

The opposition Parti Islam SeMalaysia (PAS) called the rally a ploy by Umno to divert attention away from the scandals linked to Mr Najib, the Malaysian Insider reported, citing a statement released by the party.

PAS deputy president Datuk Tuan Ibrahim Tuan Man said the protest was not an act which represented Malays, but Umno. "Don't let their plot to divert your attention succeed," he said, as he urged Malaysians not to react to the rally.

Many ruling Barisan Nasional leaders, including Mr Najib, was in Kota Kinabalu to mark Malaysia Day on Wednesday.