PETALING JAYA (THE STAR/ASIA NEWS NETWORK) - A man who allegedly hit a car wash worker in the face and broke his nose after complaining that the latter had dirtied his car has been arrested by the Malaysian police.

He added that the police were in the process of applying for remand.

On Saturday, The Star reported that a closed-circuit television (CCTV) footage showed a man scolding and striking the foreign worker, who was seen holding a wash cloth in the front seat of a luxury SUV. 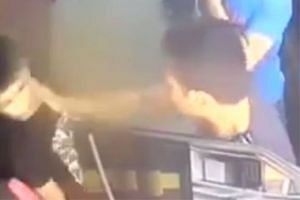 According to car wash owner Atie Abdul Hamid, who uploaded the video that went viral, the man accused the worker of dirtying his car.

She alleged that the man also refused to pay for the car wash and instead asked for RM1,000 (S$330) in compensation.

She claimed the worker was slapped a second time at another location, causing the worker to "bleed non-stop".

After visiting a clinic, the worker was referred to a hospital where doctors confirmed that he had a broken nose. When contacted, Ms Atie said that the worker was still in hospital.