PUTRAJAYA - Prime Minister Mahathir Mohamad defended his party's pro-Malay stance on Saturday (Dec 29) amid criticisms raised even within his ruling Pakatan Harapan (PH) alliance that race-based policies should be toned down or abandoned in the Malaysia Baru (New Malaysia) administration.

He said while Malays have made great strides, many in rural and urban areas lagged behind in education and the economy and feel more comfortable with a political vehicle that promotes Malay interests.

Tun Mahathir spoke about the issue as his Parti Pribumi Bersatu Malaysia (PPBM) takes a different tack from the other three PH members which look at issues through multiracial lens, and following several street rallies by thousands of Malays against the PH government.

"They (the Malays) feel that they must be protected and they feel this could only be done by their own race through politics. That is why a party comprising Malays and led by them needs to be formed," he said.

He added that while Umno was formed for the same reason decades ago, it has collapsed due to the greed of its leaders.

Dr Mahathir was speaking at PPBM's first annual assembly after winning the general election, and only its second annual meeting since being formed in 2016. The three-day assembly attended by 1,210 delegates at the Putrajaya International Convention Centre ends Sunday. 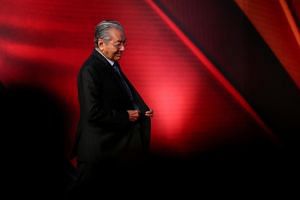 Dr Mahathir, who led Umno and Malaysia for 22 years between 1981 and 2003, was more blunt in defending his position in a group interview with select Malaysian journalists ahead of the annual meeting.

He said: "The Malays are scared, they feel threatened. They feel that if they are small, they cannot get anything from equality and equal treatment in this country. They are looking for parties.

He said in his speech: "We are responsible for Malays and Bumiputeras (indigenous races). Is this racist? Even in a single-race nation, when there is too big a gap between the poor and the rich, history states that riots will occur, civil war will break out, and the country will be destroyed."

Measures to be taken to reduce Malay poverty, he said, include providing training and education for women in rural areas to do business. He also promised special initiatives for youth and entrepreneurs.

A Putrajaya delegate at the annual gathering, who declined to be named, supports the government's pro-Malay aid, saying: "You have to make sure the Malays are contented. At least that they have enough to live on, otherwise they will come out and protest."

PPBM's president Muhyiddin Yassin said on Friday that of Malaysia's B40, or Bottom 40, families with household incomes below RM4,360 (S$1,435) a month, 74 per cent were Malays and Bumiputeras.

"They are the farmers, fishermen, small-time traders, and labourers. They ask, what can the government offer? Will their lives be better under PH rule or otherwise?" Tan Sri Muhyiddin said at the joint opening of PBBM's Youth and Women wings.