KUALA LUMPUR - Malaysia will continue with its decades-old affirmative action policy that favours ethnic Malays, Prime Minister Mahathir Mohamad said, as it is necessary to bridge the economic gap between the community and other races in the country.

"Why should I stop? We are trying to correct disparity in wealth between the Malays and others. We have to bring up the Malays to be as wealthy or well-off as others. That needs correction," he said in an interview with British broadcaster the BBC, which aired on Tuesday (Oct 2).

The 93-year-old leader of the Pakatan Harapan (PH) government told HARDtalk programme host Zeinab Badawi that if wealth disparity was left unchecked, it could create tension and lead to confrontations.

Malaysia introduced the national economic policy in 1971, after it experienced deadly racial riots in 1969 that were fuelled by the economic gap between the Chinese and the Malays.

Other PH leaders like Economic Affairs Minister Azmin Ali and prime minister-in-waiting Anwar Ibrahim have recently said that the policy should be reviewed so that it is based on need, and not race.

Dr Mahathir was also asked about his rapprochement with Datuk Seri Anwar, the deputy PM he had sacked in 1998 during his first stint as prime minister. The former foes mended fences in 2016 and teamed up to topple the Barisan Nasional administration in the May general election. 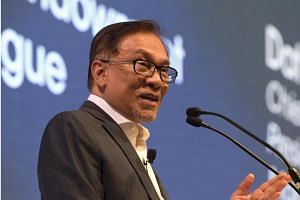 Malaysia's affirmative action policy should be based on need, not race: Anwar Ibrahim

During the interview, Ms Zeinab read out a quote from Mr Anwar which said: "Mahathir has proven his tenacity, accepted past limitations, apologised and sacrificed his time and energy to raise the dignity of the people and the country."

Responding to the quote, Dr Mahathir said he has never apologised for sacking Mr Anwar.

"I didn't tell him that, but other people put words into my mouth because they want me to apologise. But I never made any formal apology to him," said Dr Mahathir.

Mr Anwar was later imprisoned for corruption and sodomy, charges he maintains were politically motivated.

Asked if he felt apologetic, Dr Mahathir said: "I feel sorry for those who have done something and were sentenced to jail."

His reputation for speaking bluntly was also displayed during the interview when he described Jews as "hook-nosed" and blamed them for creating the troubles in the Middle East.

"If you are going to be truthful, the problem in the Middle East began with the creation of Israel. That is the truth. But I cannot say that," he said.

When asked why he described Jews as "hook-nosed" in his book The Malay Dilemma, he said: "They are hook-nosed. Many people called the Malays fat-nosed. We didn't object, we didn't go to war for that."

According to Reuters, when addressing the UN General Assembly in New York last week, Dr Mahathir said the world "rewards Israel" for breaking international laws and committing acts of terrorism against Palestinians.