He said it was Mr Anwar's right to contest the parliamentary seat in a by-election and it was not an area that he will interfere.

"He rang me up from Hong Kong to tell me that he has a by-election. I told Anwar that normally, I don't go and campaign for by-election but I will endorse his candidature," he said.

Asked if it was too soon to have a by-election, Tun Dr Mahathir said: "I have no opinion on that."

He said that Pakatan Harapan would take note of the observation made by the public about the by-election.

Responding to questions if government positions would be offered to Mr Anwar if he won Port Dickson, Dr Mahathir said a statement was recently issued by PKR secretary-general Saifuddin Nasution that Mr Anwar would not seek any position.

"I think it's with the consent of Anwar that he says this. As far as my relationship with Anwar is concerned, it's okay. It's as good as can be," he said. 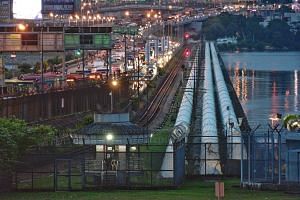 Anwar: Malaysia and Singapore should resolve and move beyond issues to improve ties

Dr Mahathir also said it was already agreed that Mr Anwar was his successor.

"I'm not reneging on my promise. The period of course is not very certain but I'm conscious that I'm very old. In three years' time, I will be 95," he said.

On rumours that Umno wanted to work with PKR to get back into government, Dr Mahathir said there was no way Pakatan was going to accept Umno but if their members join any Pakatan component parties as individual members, then they could be accepted.

On the stand made by Port Dickson Bersatu that PKR's Rafizi Ramli and Datuk Abdullah Sani Abdul Hamid would not be allowed to go there, Dr Mahathir said it was just an opinion voiced by ordinary members.

Meanwhile, Dr Mahathir said fugitive businessman  Low Taek Jho, also known as Jho Low, was being hidden somewhere and he could not be reached.

Asked if he was hidden by the Chinese government or Malaysian government, he said: "I don't accuse anybody."