PETALING JAYA (THE STAR/ASIA NEWS NETWORK) - A pregnant mum-to-be whose in-laws chased down a Milo van to satisfy her cravings was able to gulp down five cups of the malty chocolate drink when one of the iconic vans made a special visit to her house.

Several days earlier, Natasya Rose Nizam's in-laws in Kuantan had spotted a delivery truck and knew that the 23-year-old - who is eight months pregnant with her first child - was thirsting for Milo. They gave chase and managed to flag it down, only to be told by the truck driver that he did not have the drink available.

Natasya's husband, Muhammad Azmer Mohd Badrul Merzam, told mStar his sister was with his parents that day and the one who filmed the chase that he subsequently uploaded.

The video went viral and Milo decided to give Natasya a surprise.

A green truck was dispatched to Natasya's house in Bandar Indera Mahkota, Kuantan on Wednesday (May 1).

"I was very surprised and emotional as I did not expect this," Natasya told mStar.

"At that time, I was busy entertaining guests because there was a party with orphans and our relatives had come too," she said.

The housewife also said her husband and in-laws did not give any indication whatsoever that the truck would be coming.

"I initially did not notice the Milo representatives in front of my house because I was too busy entertaining relatives.

"I had five cups of Milo," said Natasya. 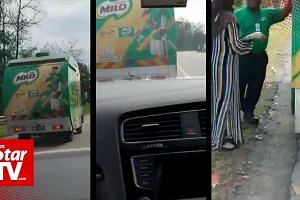 The driver of the Milo van at Natasya's house was also the same one driving the vehicle her in-laws chased down in the viral video.

"This is our 'Milo big brother'. Thank you very much for coming to our house," said Azmer in another video, as he put his arm around the driver's shoulders, with both of them smiling broadly.

She had earlier said that she was very touched when she watched the video of her parents-in-law chasing down the truck - all for her sake.

"We are happy to be able to fulfil her craving for the drink," she said.