JOHOR BARU (THE STAR/ASIA NEWS NETWORK) - The one-month extension of the deadline for Malaysia to decide on the Rapid Transit System (RTS) project came in for further debate here, with several leaders questioning the need to ask for more time.

The initial six-month deadline for Malaysia to review the RM4 billion (S$1.3 billion) project to build a 4km cross-border MRT link from Woodlands in Singapore to Bukit Chagar in Johor to help alleviate congestion at the Causeway was to expire on Monday (Sept 30).

The deadline has been extended by Singapore up to Oct 31 following a request from Malaysia.

Pasir Gudang MP Hassan Karim said there were "other means" for Putrajaya to look for funding to finance the project.

"The people have been waiting for this project, as it will greatly reduce the acute congestion problem at the Causeway that affects thousands of Malaysians and Singaporeans.

"So, this project has to be given priority," said the PKR lawmaker.

"They know that this project is needed, as it allows smoother movement of people from both sides, making the RTS an alternative to the Causeway which is already heavily congested," said the Umno vice-president.

"The government should also consider the negative impact on the people's health, livelihood and safety.

"The RTS should be continued to ease the burden of the people. Let there be no political agenda," said Dr Tee, who is the MCA International Communication and Diplomacy Bureau chief.

Johor Mentri Besar Sahruddin Jamal said the state government had not been notified by Putrajaya on the extension granted by Singapore. 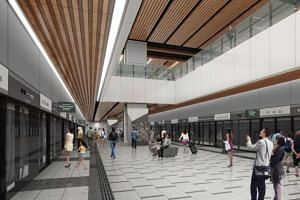 He pledged to give Johor's fullest cooperation to the Federal Government.

"However, at the moment, I don't have much details," he told reporters on Saturday.

"The Malaysian government would not have asked for an extension if they were not interested in resuming the project.

"The extension is also only for one month, not another six months or longer.

"I believe this is because they needed a little more time to iron out some details," he said, adding that the RTS was vital for Johor.

Johor Baru MP Akmal Nasir of PKR said the extension would give the government more time to study whether the RTS would have a negative impact on the country's finances.

"The RTS is something that both Malaysia and Singapore really need because it will ease traffic flow at the Causeway.

"But our government still needs to study the project thoroughly due to its financial impact," he added.

The Star reported on Saturday that Singapore had approved Malaysia's request for one more month to make a decision.

In March, Malaysia asked for a six-month extension to respond to Singapore on issues relating to the project.

Malaysia wanted to find new ways to reduce the cost of the RTS, including getting the private sector to fund and operate it.

Later in May, Singapore and Malaysia agreed to suspend work on the RTS link until Sept 30.

Both governments signed a bilateral agreement last year to build the MRT link.

The completion date will likely be delayed beyond the original target of Dec 31, 2024.