KUALA LUMPUR - A Malaysian minister has suggested a "third bridge" linking Johor and Singapore to ease congestion experienced by those who commute across both countries daily, as he waded into an ongoing debate on whether to replace the Malaysian side of the Causeway with a "crooked bridge".

There are currently two land links into Johor - the Causeway in Woodlands and the Second Link bridge in Tuas.

The idea to replace part of the Causeway with a "crooked bridge" was revived this week by Johor Menteri Besar Osman Sapian, who said he had recently raised the issue with Prime Minister Mahathir Mohamad.

Tun Mahathir in 2002 raised the "crooked bridge" idea, or a "half bridge", as Singapore wanted to retain its half of the Causeway. But the plan was dropped in 2006 by Tun Abdullah Badawi. Mr Abdullah took over as prime minister in late-2003.

The project was dubbed the crooked bridge as the infrastructure would involve a six-lane, S-shaped road that would allow vessels to pass underneath. 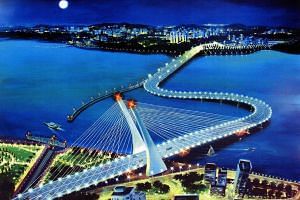 Mr Jayakumar, a vice-president in Parti Keadilan Rakyat - a member of the ruling Pakatan Harapan government - said on Thursday that having a third land link between Johor and Singapore would make more sense than replacing the Malaysian side of the Causeway with a bridge.

"In my opinion... Malaysia and Singapore are in dire need of a third bridge, crooked or otherwise. At present, those who commute across both countries on a daily basis are well aware of the long and arduous hours to get across the present two bridges namely the Causeway and the Second Link," he said in a statement.

"The issue continues to plague motorists, with the heavy traffic jam becoming much worse during the festive season."

Malaysia's Economic Affairs Minister Azmin Ali said on Wednesday that the "crooked bridge" project at the Causeway is not an immediate priority due to current economic conditions.

Dr Mahathir, asked by reporters on Thursday, said Malaysia could build the "crooked bridge" to replace its half of the Causeway without asking Singapore for permission. But a proposal to build a "third bridge" joining Johor and Singapore, would need consent from the Republic, he added.

Meanwhile, a spokesman from Singapore's Ministry of Foreign Affairs said on Thursday that the Republic has "not received any official proposal or communications from Malaysia related to the construction of a crooked bridge or any other new link between Singapore and Malaysia".