KUALA LUMPUR (THE STAR/ASIA NEWS NETWORK) - Malaysia's Human Resources Minister M. Kulasegaran said on Saturday (June 23) the call for restaurants to only hire local cooks was just a suggestion, after some restaurant and coffee shop owners expressed their shock at the announcement.

Kulasegaran had said on Friday that all restaurants serving Malaysian food are required to recruit only locals as cooks from Jan 1.

Speaking to the Star on Saturday, Kulasegaran said that the ministry will be "reasonable" in getting food operators to hire local cooks. "We will engage with the various stakeholders before the final process," he said, adding that he had given a date for the move as there needed to be a cut off period.

Kulasegaran also clarified that the local cooks requirement is only applicable to "ordinary local food" outlets and does not apply to foreign food restaurants, high-end restaurants and five-star hotels which require specialised cooks. "We are being reasonable," he said.

"We just want it to be properly regulated, and have the same laws applied to all states. We want to be consistent," said Kulasegaran.

Kulasegaran added that the policy was needed to reduce the number of foreign workers in the country. 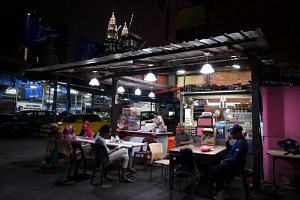 "We want to reduce the dependency on foreign workers," he said.

The announcement was met with shock by some food owners associations.

Malaysian Muslim Restaurant Owners Association president Ayoob Khan Muhamad Yakub described the announcement as "shocking and horrific", adding that the government should discuss the matter with stakeholders before making a regulation that will affect many restaurant owners.

"It is never an easy task to hire local workers for mamak (Indian Muslim) restaurants," said Ayoob, adding that most Indian Muslim restaurants in the country hire South Indian cooks as their wages were reasonable and the culture of the workers were compatible with ours.

His comments were echoed by Original Kayu Nasi Kandar proprietor Buruhan Mohamad, who said it was "near impossible" to not have foreign cooks working at restaurants.

"We can try getting local cooks but it will take a longer time to train them with our recipes and for them to get the dishes right," he said.

The Malaysia-Singapore Coffee Shop Proprietors General Association president Ho Su Mong said many coffee shop owners would find they were unable to comply with the regulation given the short time-frame.

"It takes about one or two years to train a person to cook (a type of cuisine) well. There wouldn't be enough time to train locals to cook," said Ho, adding that coffee shop owners would gladly employ local cooks if there were enough of them to meet the demand.