KUALA LUMPUR - A Malaysian man was detained just hours before planning to blow himself up at an entertainment venue in Kuala Lumpur, the Associated Press quoted a government official as saying on Sunday (Jan 17), after authorities raised the alert level following bombings in neighbouring Indonesia.

A 28-year-old Malaysian was detained on Friday at a monorail station in Kuala Lumpur, said national police chief Khalid Abu Bakar, according to AP. He said the man confessed he planned to blow himself up in an attack after receiving orders from members of the Islamic State in Iraq and Syria (ISIS).

A government official, who declined to be named, told AP the man is an insurance salesman from north-east Terengganu state. The official said the suspect was detained just hours before his planned suicide attack at an entertainment outlet, either a karaoke bar or a pub.

Khalid said in a statement that the man also had been hanging ISIS flags in several Malaysian states to oppose the government's crackdown on the militant group within the country. Khalid tweeted that "weapons and ISIS documents" were seized when the man was detained.

Police have raised the security alert to the highest level following the deadly attacks in Jakarta on Thursday. Security has been increased at public places such as shopping malls and tourist spots, with extra precautions taken at border areas to prevent any infiltration by militants, Khalid said.

Separately, Datuk Seri Tengku Adnan, the federal territories minister, said his Ministry would work with the police to beef up security in popular tourist spots in Kuala Lumpur, The Star reported. 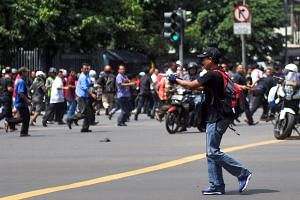 "We are aware of the threats and we are on standby for any possible event," Mr Tengku Adnan said on Sunday morning after officiating the Federal Territories flag campaign in conjunction with the FT Day celebration, according to The Star.

Mr Tengku Adnan said popular shopping and tourist spots such as The Curve, Solaris, Hartamas and KL Tower were also being targeted.

"We will look into engaging the Defence Ministry to secure popular tourist and leisure hot spots if the need arises," he added.

He said that the motive of these groups was to destabilise popular tourist countries and create fear, similar to the last Thursday's attacks in Jakarta.

He urged the public to come forward if they noticed anything suspicious or if they have information on any terror-linked activities.