KUALA LUMPUR (THE STAR/ASIA NEWS NETWORK) - More than 10 judges, including the Chief Justice and the Chief Judge of Malaya, sacrificed their weekend for a gotong royong (mass volunteering) at the court premises in Kuala Lumpur after its janitors went on strike following a dispute over pay with the contractor.

From 10am on Sunday (July 29), they swept and mopped the corridors and washed the toilets on all eight floors of the court house.

Malanjum, who appeared to be in high spirits, said he had not forced anyone to participate in the gotong royong and that they came forward on their own,

Administrative assistant Faziah Ahmad said she volunteered to help as the court could not be left dirty.

"You don't want to leave it as it is. There were also some who took their own initiative to clean the toilets before this gotong royong," she said.

The only lawyer who turned up to scrub the court house was criminal lawyer Kitson Foong. He was on hand to help clean the toilet he frequently used in the court.

"You can't stand there complaining and whining about how dirty it is. You must be prepared to get your hands dirty. Nobody wanted this situation. Whatever the contractual disputes are, it is for another day," he said.

Foong lamented at being the only lawyer in attendance.

"As members of the Malaysian Bar, we are stakeholders. We should get up, dress up, show up and help clean up," he said.

He added that public perception of the administration of justice was important, while expressing his desire to see the contractual dispute resolved soon.

Meanwhile, Zaharah said that a misunderstanding between the janitors and the contractor had led to the strike.

"We are taking steps to ensure that this problem does not recur," she said.

Zaharah said they have had discussions with the cleaning contractor and that they would solve the problem on Monday. 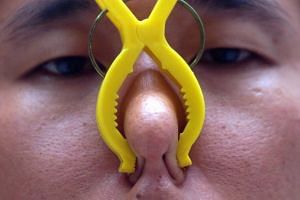 A spokesman from the contractor Perfect Three Solution Sdn Bhd clarified that the janitors only went on strike last week, and not since Ramadan as reported.

He said the janitors promised to turn up for work after their salaries were paid, but they did not.

"We did not expect this," he said, adding that 100 out of the 120 cleaners at the court had gone on strike.

He said they were sourcing for more workers and promised that there will be cleaners at the court on Monday.