NICOSIA - Fugitive businessman Low Taek Jho has a passport from Cyprus, a newspaper on the island has reported, even as Malaysian police said on Monday (Nov 4) that they are keen to bring him home to face justice over the 1MDB scandal.

Cyprus is an island nation in the Mediterranean, located to the south of Turkey and west of Lebanon.

Low, who is widely known as Jho Low, obtained the Cypriot passport four years ago, the daily Politis, which is published in Cyprus, reported on Sunday.

It said Low, "perhaps the most sought-after businessman on the planet in the last 4 years, is a Cypriot national".

This came about, the Greek-language daily said, after Malaysia revoked his passport and issued an arrest warrant against him.

The United States Department of Justice (DOJ) has said that Low and other accomplices siphoned US$4.5 billion (S$6.1 billion) from state fund 1Malaysia Development Berhad (1MDB), which was set up in 2009 by then Prime Minister Najib Razak.

The DOJ last week reached a deal to recover almost US$1 billion in funds which Low and his family had allegedly misappropriated from 1MDB to buy luxury homes, expensive artwork, a superyacht and a private jet.

The Politis report carried a picture of a Republic of Cyprus passport showing Low sporting a light moustache.

The report said Low, 37, had obtained the services of an international passport and citizenship broker to first secure a passport from Saint Kitts and Nevis - an island in the West Indies not far from Cuba - but that this document has been cancelled amid the global probe into 1MDB.

Low, Politis said, obtained the Cypriot passport through the Cyprus Investment Plan. Under the plan, a person interested to get a passport must deposit €5 million (S$7.6 million) in a Cypriot bank for three years and buy a permanent home worth at least €500,000, media reports say.

Politis said Low bought an unfinished villa worth €5 million in Cyprus to fulfil the conditions on Sept 23, 2015. 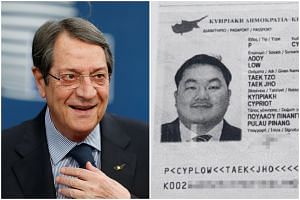 Previous media reports say Low had flitted between China, Macau and Hong Kong, and was lately seen in the United Arab Emirates.

Low received the support of Archbishop Chrysostomos II of Cyprus in his attempt to obtain a passport from the government, Politis said, as reported by Bloomberg.

The head of Cyprus' Christian Orthodox church in a Sept 1, 2015 letter to the then interior minister Socrates Hasicos had expressed his request for Low to be granted a naturalised citizen status through the government-backed Cyprus Investment Plan. The archbishop told the minister Low would be in Cyprus on Sept 18 that year to discuss potential investments on church land, the report said.

Meanwhile, asked on reports that Low now has a Cyprus passport, Malaysia's police chief on Monday said the matter is being investigated.

"We have received information that he is exploiting a country that needs money for their economy," said Inspector-General of Police Abdul Hamid Bador.