SERDANG (BERNAMA) - The tragedy of six divers of the Fire and Rescue Department (JPBM) Water Rescue Unit (PPDA) drowning during a search and rescue operation (SAR) on Wednesday (Oct 3) is a first in the history of the department, according to officials.

When met at Serdang Hospital, JPBM director-general Mohammad Hamdan Wahid said that before this SAR operation, there were few fatal incidents involving firemen.

"This is the first time as many as six personnel died. There was one previous case when we lost two members of the department. We carried out CPR but could not save them and this is a very sad day for us. One which involved so many of our employees," he said.

Six PPDA divers died when conducting an SAR operation at 9.15pm on Wednesday for a teenager who fell into a disused mining pool at Taman Putra Perdana, Puchong, and was feared drowned.

Director-general Mohammad Hamdan said the JPBM would look at every aspect of the welfare of the families of the victims, including in terms of compensation and insurance.

He said the Serdang Hospital Forensic Department was currently carrying out postmortems on all the victims.

He said that after the completion of the postmortems, all the remains would be taken to the Shah Alam Fire and Rescue station for a final tribute before being taken back to their respective hometowns for burial. 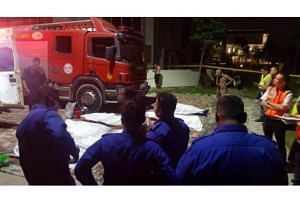 Housing and Local Government Minister Zuraida Kamaruddin and Balakong assemblyman Wong Siew Ki were also at the hospital to comfort the family members of the victims.

Meanwhile, Ms Shamiza Salleh, 32, the wife of Mr Adnan Othman, said she received a call about the tragedy at 11pm.

"I was informed about what happened by his friend (Adnan's). I was at home then," she said.

She broke down after that and was unable to say anything more.