“The MACC is shocked by the decision by the Penang High Court in acquitting the former chief minister of the charges of corruption in relation to the sale of a bungalow lot and the charge of conspiring with businesswoman Phang, after the prosecution retracted the case.

“The MACC would like to stress that the decision was made by the Attorney General’s office and not the MACC,” the anti-graft agency said in a statement Monday, as quoted by The Star.

Mr Lim has been acquitted of corruption charges after the Attorney-General's chambers withdrew its case against him.

According to news site Malaysiakini.com, the Penang High Court on Monday discharged Mr Lim of two charges - that he used his former position as Chief Minister of Penang to approve the conversion of land, and that he gained gratification for himself by buying a bungalow below market value.

Mr Lim had pleaded not guilty to the charges in 2016, when he was a member of the then-opposition Pakatan Harapan pact.

The acquittal comes after Mr Lim's lawyers argued that the charges against him were politically motivated, and filed representations to the AG's chambers for the cases to be dropped after PH was elected to power in May.

Ms Phang, from whom Mr Lim had bought the bungalow in 2015, was also acquitted of the corruption charge against her.

The prosecution had initially asked for a discharge not amounting to an acquittal, reported Malaysiakini, but the judge ordered a full acquittal instead.

Speaking to reporters later, Mr Lim thanked his lawyers, family, friends and supporters for placing their utmost trust in him.

“I am definitely grateful that justice has prevailed at the end with our acquittal,” he said, maintaining that the charges against him were defamatory in nature from the start, reported The New Straits Times. 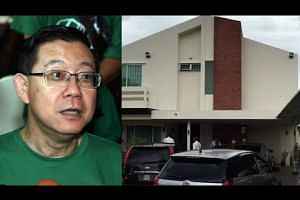 Mr Lim had been charged with using his position as Chief Minister to gain gratification for himself and wife Betty Chew Gek Cheng by approving the application for conversion of agricultural land to a public housing zone in Balik Pulau to a company, Magnificent Emblem Sdn Bhd in July 2014.

According to local media reports, Ms Phang was a director of Magnificent Emblem at the time.

The offence carries a sentence of imprisonment of up to 20 years and a fine of up to five times the sum or value of the bribe.

If convicted of this second charge, he would have faced imprisonment for up to two years, or a fine, or both.