Najib pleaded not guilty after the charges were read out to him before Sessions Court judge Azman Ahmad on Friday (Feb 8).

According to the charge sheets, Najib was accused of being involved in money laundering in his three AmPrivate Banking accounts.

All the offences were allegedly committed at AmIslamic Bank Berhad, Ambank Group Building, No. 55 Jalan Raja Chulan on July 8, 2014.

The court allowed a personal bond for Najib on all the three charges.

DPP Manoj Kurup appeared for the prosecution while Najib was represented by lawyer Muhammad Shafee Abdullah.

Najib was first hit with the same charges at the High Court on Jan 28. 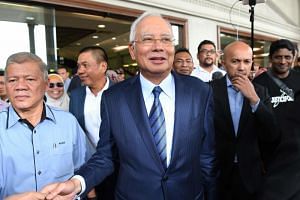 However, High Court judge, Justice Mohd Nazlan Mohd Ghazali, gave him a discharge not amounting to an acquittal on the three charges after allowing an application by the prosecution, which was led by Attorney-General Tommy Thomas, during the proceeding on Thursday.

A-G Thomas made the application for the discharge on grounds that the prosecution did not wish to proceed on the three charges against Najib before the High Court and would seek to charge him again before the Sessions Court.

The former premier faces dozens of criminal charges linked to scandal-ridden state fund 1Malaysia Development Berhad (1MDB), including allegations of money laundering, criminal breach of trust and abuse of power. He has denied any wrongdoing.