KUALA LUMPUR - Hundreds of supporters of the Malaysian electoral reform group Bersih gathered outside Parliament on Wednesday (March 28) to protest against the tabling of changes to the country's electoral boundaries ahead of polls that are expected to be called within weeks.

Clad in the group's signature yellow T-shirts, they started gathering amid tight security at the National Monument, located near the Parliament House, hours before the Election Commission's (EC) redelineation report was tabled by Prime Minister Najib Razak.

Members of the opposition Pakatan Harapan (PH) alliance, who have also criticised the report, and its supporters took part in the protest.

The group later managed to submit a memorandum on the report to Parliament officials, as part of its bid to prevent the redelineation, which it said was done unfairly and without due process. The crowd dispersed after the report was submitted.

The report was tabled by Datuk Seri Najib at about noon after a brief recess called by Speaker Pandikar Amin Mulia following an attempt by opposition lawmakers to halt it from being presented, but their challenges were thrown out. The lawmakers had cited ongoing court cases on the electoral map changes to protest against the report's tabling.

Amid the chaos in Parliament, veteran opposition lawmaker Lim Kit Siang of the Democratic Action Party (DAP) was given a six-month suspension by Tan Sri Pandikar after a bout of disagreement between opposition Members of Parliament and the Speaker over the legitimacy of tabling the redelineated maps.

The changes were now being debated by lawmakers and are widely expected to be passed on Wednesday night.

Former prime minister turned opposition leader Mahathir Mohamad, who attended the protest with his wife, earlier told protesters not to be afraid to vote for the opposition, accusing the government of amending laws in order to secure a victory, the Malaysiakini news website reported.

"We have to be brave to oppose it. Najib won't know whom you vote for. Don't be afraid," said the Parti Pribumi Bersatu Malaysia chairman. The party is part of the four-member PH alliance, which also includes the Parti Keadilan Rakyat (PKR), the DAP and the Parti Amanah Negara.

The police said they deployed about 400 police personnel and members of the anti-riot Light Strike Force outside the National Monument and the Parliament House to ensure security. Some of the riot police were armed with teargas guns and batons.

No one was arrested in the protest, although police said they would investigate the gathering under the Peaceful Assembly Act and call in those necessary to assist in investigations.

Vehicles had also been blocked from entering the area. 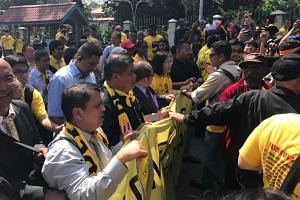 The proposed new electoral boundaries have been widely criticised by both opposition lawmakers and analysts as gerrymandering.

Bills on electoral map, fake news to be tabled in Malaysian Parliament

Critics tout the changes as packing opposition supporters into certain wards, creating several superseats that are seen as lost causes to the ruling coalition while carving out boundaries with seats that will favour the current administration.

The government, however, says the changes were drawn up by the EC itself and rejects the suggestions of political interference.

Former Bersih chairman Ambiga Sreenevasan said at the protest that voters must hold the EC accountable over the report. "We must make our voices heard. We must tell them that we don't accept the report at all," she was quoted saying by The Star.

PKR president Wan Azizah Wan Ismail told supporters: "This is our right to vote and this is our future. We are the voters and we must do something."