KUALA LUMPUR - Malaysia's lawmakers approved an anti-fake news law on Monday (April 2) despite numerous protests from opposition lawmakers and civil society groups that it would be misused to muffle dissent ahead of a general election expected within weeks.

The legislation, which carries stiff punishments of up to six years in prison and a maximum fine of RM500,000 (S$170,000), was voted through in Parliament's Lower House with 123 votes for and 64 votes against after the Bill's second reading.

"This law is not intended to restrict freedom of speech but to restrict the dissemination of fake news," said Azalina Othman Said, the de facto law minister overseeing the Bill's path into legislation.

The Bill will next be debated in the Senate, and expected to be passed before the current Parliament session ends on Thursday. Once the Bill passes both houses, it will be gazetted into law after receiving the King's assent.

The law - which makes it a crime for someone to maliciously create fake news - could be implemented within days, amid concerns that the authorities would start clamping down on dissent and reports unfavourable to ruling coalition Barisan Nasional (BN) during election campaigning and post polls.

"Activists fear the fake news bill could be used against critics of gerrymandering or other elements of the electoral process," said Brad Adams, Asia director of Human Rights Watch in a statement.

Besides tough penalties, the law's broad coverage allows charges to be brought against other nationalities outside Malaysia, so long as the fake news involves Malaysia or a Malaysian citizen. 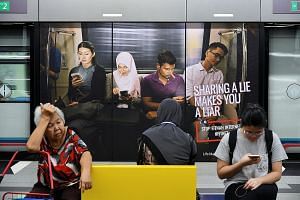 The law defines fake news as "any news, information, data and reports, which is or are wholly or partly false, whether in the form of features, visuals or audio recordings or in any other form capable of suggesting words or ideas".

"The Malaysian government has no monopoly on the truth, but it's attempting to be the arbiter of what can and can't be said and written," Mr Adams said.

But defenders of the Bill argued those without guilt should not fear the advent of the new law.

“Only those who are already spreading or intend to spread fake news would oppose the need for this law,” said Datuk Seri Azalina.

Malaysia already has existing laws governing the spread of false information, and defamation and libel.

“When the bill is brought forward in Parliament on the cusp of elections, it raises questions and doubts especially from the opposition,” said Awang Azman Awang Pawi, a political analyst professor at Universiti Malaya. He added that the law could be misused and treated as a political weapon to silence criticism against the ruling administration.

Ms Azalina, in her reply in Parliament on Monday denied that the law would only benefit the government, adding that the power to determine what constitutes fake news lies in the courts, not in the government or the minister. She also said that the new law provided a means for victims of fake news to seek justice.

Communications and Multimedia Minister Salleh Said Keruak reiterated in his blog on Monday that freedom of speech will not be curtailed by the anti-fake news law. He said that Malaysia is not alone in finding such a law necessary, referring to countries like Singapore, the Philippines and Germany which “are considering or have introduced similar legislation”.

“... the Malaysian government, along with many others around the world, will not hesitate to take the necessary steps ahead of our imminent election to ensure that the well of democracy is not irretrievably poisoned with lies, falsehoods, smears and supposition,” Datuk Seri Salleh added.