Speaking at a meeting with the renowned US Council on Foreign Relations in New York, Tun Mahathir pointed out that Malaysia has no extradition treaty with China.

"It is quite tricky for us to accuse China of hiding him, so we are trying to work out some ways or private efforts to get back Jho Low from China," he said.

Dr Mahathir said this in response to a question on whether Low is in China.

He was also asked whether Malaysia has communicated with China about seeking Low's return to Malaysia to be prosecuted over the 1Malaysia Development Berhad (1MDB) scandal. 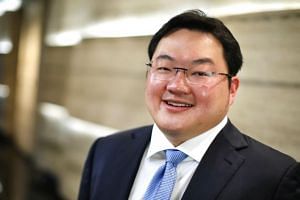 Asked why China has not expelled Low, Dr Mahathir said he did not know their thoughts.

Pressed further on what was his best guess, he said with a laugh: "Well, maybe he's a bargaining chip or something like that."

Dr Mahathir was also asked during the event whether Malaysia's ties with Saudi Arabia has been affected, as former premier Najib Razak has said that it was a Saudi royal who gave him the controversial RM2.6 billion (S$860 million) donation.

Dr Mahathir said that Malaysia has not made any direct accusation against Saudi Arabia.

"Well, we haven't made any direct accusation against them.

"What we have done is something like pulling back our troops, but that is not connected.

"Of course, we don't know really what the Saudis think, but if they really did give the money to Najib, just show us the evidence. So far, no evidence," said Dr Mahathir.