PETALING JAYA (THE STAR/ASIA NEWS NETWORK) - The government has decided to abolish toll charges gradually and in phases, in line with Pakatan Harapan's (PH) general election pledge to the people.

Sources say that while a study currently being conducted on toll charges will only be finished by June, at least one concessionaire has offered to give rebates and discounts to road users in the meantime.

"It was agreed that tolls would be abolished over time but it will be phase by phase, not immediately," a source with direct knowledge of the matter said.

According to Works Minister Baru Bian, the government would only make a final decision after the study was submitted.

"In fact, we are looking at it at the short term, medium term and long term. There are some proposals that are feasible and can be implemented in the immediate future for the short term.

"These are the things I think Tan Sri Muhyiddin (Yassin) was referring to. Not the whole subject matter of tolls," he said after witnessing the installation ceremony of Parti Keadilan Rakyat Sarawak central zone branches committee members.

Speaking at a ceramah in Semenyih ahead of polling in the by-election for the Selangor state seat on March 2, Tan Sri Muhyiddin had said that PH might issue a statement within the next "day or two" regarding tolls. 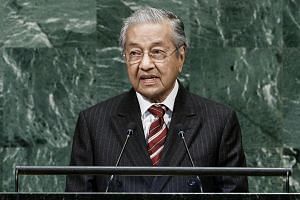 Mr Muhyiddin, who is Parti Pribumi Bersatu Malaysia president and Home Minister, told the ceramah on Thursday (Feb 21) night that the Cabinet had discussed ways to help ease the people's difficulties on many occasions.

"Many people criticise us for not fulfilling our manifesto pledges. Maybe there are one or two issues such as tolls," Mr Muhyiddin said.

"I am sure there will be clarity when the announcement is made but until then, please do not speculate," Mr Lim told a media conference on Friday (Feb 22) after witnessing the Novation Agreement for the LRT3 work package contractors contract.

Mr Lim also declined to confirm whether he would be making the announcement, but said PH remained committed to its manifesto and would not wash its hands of its pledges.

"It is our commitment, but we must also look at the government's capabilities because as you all know, the cost of these things is very high.

"However, we will continue to fulfil our promises," he added.

Abolishing tolls was one of PH's pledges in its manifesto for the 14th General Election last May.

But PH has not been able to deliver on it after winning power due to the massive debts left behind by the previous administration,

In June last year, Mr Lim said the promise to abolish road tolls would only be looked at once Malaysia's financial situation had improved.

In November, Works Minister Baru Bian told the Dewan Rakyat that there were 29 highways with tolls in the country.

Of the 29, the concession for two would end in 10 years' time, while agreements for another 16 would end between 11 and 20 years' time.

The remaining 11 are highways where tolls will be collected beyond the next two decades.

Mr Baru also told Parliament that his ministry had been given six months to negotiate with the stakeholders and concessionaires.

He said any move to help Malaysians reduce the rising cost of living would benefit not just the bottom 40 per cent households (B40 group) but the middle 40 (M40) households as well.

"This means they have to pay for parking, get stuck in jams and pay tolls," Datuk Selvaraj said.

Airfreight Forwarders Association of Malaysia chairman Walter Culas said the reduction or abolishing of tolls would have little impact on the industry.

"The sum reduced or abolished would be negligible and have little impact on the overall costing in transporting goods from one destination to another," said Mr Culas.