"Yes, we will reopen the embassy," Tun Dr Mahathir said in an interview with the Nikkei Asian Review published on Monday (June 11).

On Tuesday, US President Donald Trump and North Korean leader Kim Jong Un shook hands and smiled as they started a historic summit in Singapore, just months after they traded insults and threats of nuclear war.

Touching on the US-North Korea summit, Dr Mahathir said Malaysia should not be sceptical of North Korea's sincerity in its negotiations with the US, as suspicions would inhibit the collaboration.

"We should take North Korea at face value and get it to participate in international negotiations to moderate the rigid attitude it had before," he told the Nikkei Asian Review.

"We should take it as genuine, and try to establish a good relation including a trade relation with North Korea," he added.

He told the Japanese media that North Korea has a right to have some of its interests protected, as much as the United States does. 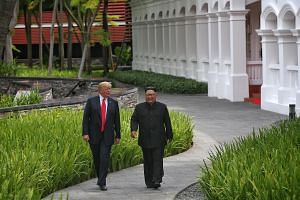 Dr Mahathir said there would be less tension in the region if North Korea promises to abandon nuclear weapons.

"Pyongyang cannot waste money on war gestures as if it is going to war. It is spending far too much money on the armed forces because of its fear of the Americans and South Koreans," he said.

When asked about his assessment of President Trump, Dr Mahathir reiterated previous statements that Trump is difficult to understand, as he seems fickle-minded.

"So we really cannot make any assessment on his policies because he changes his mind," he said.

"Sometimes, he says one thing and then changes and changes back. That makes it difficult for us to understand whatever policies he proposes," he added.

Malaysia previously had close diplomatic ties and trade relationship with North Korea, but it soured in 2017 after the high-profile assassination of Mr Kim Jong Nam, the estranged half brother of Mr Kim Jong Un, at the Kuala Lumpur International Airport.

Malaysia had withdrawn its diplomats and mulled over shutting down the embassy.

Reuters reported that the Malaysian embassy in Pyongyang has not been staffed since April 2017.