Mahathir’s comments remove the uncertainty that had been hanging over the future of Lynas’ US$800 million (S$1.1 billion) plant after Malaysia halted the process for renewing its licence because of waste disposal concerns.

Lynas is the only significant producer outside China of rare earths, the name for a group of 17 metals used in batteries, computers, televisions and smartphones.

Their importance to global supply chains was underlined this week after China, the world’s biggest producer, threatened to use the metals as a bargaining chip in its trade war with the United States.

“We think we’ll have to renew the licence,” Mahathir told reporters at a news conference in Tokyo, adding Malaysia did not want to lose such a large investment. Mahathir is in Japan to attend a business conference.

Shares in the Australian company surged to the highest in more than five years on Thursday after Chinese newspapers, including the official People’s Daily, said on Wednesday that China is ready to use rare earths to strike back in the trade war.

China supplied 80 per cent of the rare earths imported by the United States from 2014 to 2017, when it accounted for 81 per cent of the world’s rare earth production, data from the US Geological Survey showed.

The Lynas processing plant in Malaysia refines ore from a rare earths mine in Western Australia. 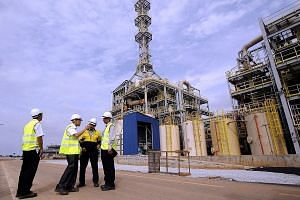 Face-off over future of rare earth plant in Malaysia

The plan hinges on Lynas receiving its Malaysian licence renewal in September and comes after the company in March rebuffed a US$1.1 billion takeover offer from Australian conglomerate Wesfarmers Ltd.

Last December, Malaysia’s environment minister said that Lynas must remove its waste stockpiles before the licence could be renewed. Lynas has maintained that it would not be possible for it to remove the waste within such a short timeframe.