KUALA LUMPUR (REUTERS, THE STAR/ASIA NEWS NETWORK) - Malaysia will impose a tax of between 5 per cent and 10 per cent on the sale of goods, while services will attract a 6 per cent levy when a new tax regime comes into effect on Sept 1, the country's customs chief Subromaniam Tholasy said on Thursday (Aug 30).

The Sales and Services Tax (SST) is being reintroduced after the government led by Prime Minister Mahathir Mohamad repealed an unpopular goods and services tax (GST) earlier this month.

The GST, which covered a broader range of items and services compared with the SST, had been set at 6 per cent.

Only 545 consumer items were exempted from GST when it was introduced in 2015, reported The Star newspaper.

Now, a total of 5,443 consumers items have been exempted from the new sales tax - 10 times the number exempted under the GST.

Among the items that will not be taxed are live animals, daily food items like rice, cooking oil and bread, general goods like newspapers and sanitary pads, and vehicles including bicycles, motorcycles below 250cc and forklifts.

Private hospitals and domestic flights, except for rural air services, will not be taxed either.

Datuk Seri Subromaniam also said at the media briefing on Thursday that the number of service tax-applicable businesses is 43.49 per cent compared to 65.85 per cent that were GST-applicable.

"There were 472,000 business that were registered with GST, but we expect only 80,000 businesses to register with SST," he said. 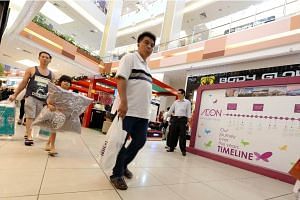 "About 85 per cent of businesses will be out of the tax net," he was quoted as saying by The Star newspaper, adding that this would help reduce prices as small manufacturers, cottage industries and small retailers will not be burdened by taxation.

Finance Minister Lim Guan Eng said at the media briefing at the Treasury building on Thursday that the SST threshold for eateries will be increased to RM1.5 million (S$500,000), reported The Star.

This means only eateries that make RM1.5 million and above annually will be subject to SST.

"We received feedback from owners of coffee shops and nasi kandar restaurants, (and) they have asked for the threshold to be increased from RM500,000 (under the GST)," Mr Lim said.

"Some have asked for it to be increased to RM3 million annually, which it is a bit too much.

"So only if your annual turnover is above RM1.5 million will you be subject to SST," the minister said.