JOHOR BARU (THE STAR/ASIA NEWS NETWORK) - The Malaysian government will get a clearer picture within the next six months on the ways to overcome congestion at the Causeway.

Foreign Affairs Minister Saifuddin Abdullah said Malaysia and Singapore had discussed the overcrowding at the Causeway. An estimated 265,000 commuters cross the link on a daily basis.

"We have discussed the problems and it is expected that in the next six months, we will get a clearer picture," he said.

"At the moment, we are looking at short-term solutions such as adding more counters, but this is still limited due to a lack of space at the CIQ (Bangunan Sultan Iskandar Customs, Immigration and Quarantine complex)," he said, after attending a seminar on global issues in Johor Baru on Tuesday (April 16).

Both Malaysia and Singapore leaders stressed their commitment to addressing traffic woes at their land checkpoints following their talks at the Singapore-Malaysia Leaders' Retreat on April 9.

Malaysian Prime Minister Mahathir Mohamad had noted that traffic congestion on the Causeway and Second Link remains a major problem for commuters and was a priority for Malaysia.

Tun Dr Mahathir said the CIQ facilities could include improvements in physical infrastructure, a review of interboundary policies and regulations, and improvements in the quality of cross-border services. 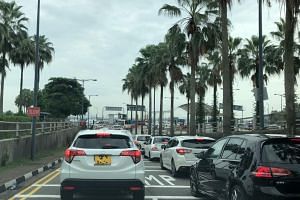 Datuk Saifuddin also said that Malaysia was hopeful that Singapore would agree to move to the second phase of the 1962 Johor River Water Agreement negotiation, which involved price modality.

"For Malaysia, we are now entering the second phase of negotiation where we should be discussing price modality, but to be fair to my colleagues from Singapore, I think they have not changed (their) position," he said.

If the talks or negotiation could not work, he said Malaysia and Singapore might have to resort to international arbitration, which would require the agreement of both sides.

Mr Saifuddin said both attorneys-general from Malaysia and Singapore would discuss the matter.