GEORGE TOWN (The Star/Asia News Network) - An 18-year-old youth who was beaten with helmets, burned on his back and sodomised by an object by five youths following a spat has died.

The case comes hard on the heels of a shocking incident in Selangor in which navy cadet Zulfarhan Osman Zulkarnain, 21, was tortured and killed last week.

Student T. Nhaveen was found unconscious at around midnight last Saturday in a field next to Jalan Kaki Bukit in Bukit Gelugor.

He was buying burgers with his best friend T. Previin, 19, when two youths known to them started teasing the duo. Previin apparently tried to stand up for his friend but the duo were instead set upon by five youths.

Previin managed to escape with eye injuries by Nhaveen, who dreamt of becoming a composer, was beaten so badly he suffered internal bleeding in his head and abdomen. He was also sodomised and burnt on his back.

He died at 5.31pm on Thursday, days after he was pronounced brain dead. Police have arrested five suspects, aged between 16 and 18, over the attack and Nhaveen's death has been re-classified as murder. 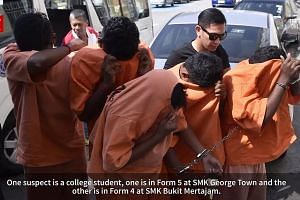 Within an hour of T. Nhaveen's death, his friends and family members - both sad and angry - filled the ground floor of Penang Hospital's Block A.

More than 50 of them crowded the second floor hallway where he had been warded while many more packed the ground floor, spilling out of the entrance way onto the hospital grounds. A pall of grief hung over the area, the quiet occasionally pierced by bitter sobs.

Nhaveen's mother D. Shanti was beyond words and needed help to stay on her feet.

Women, Family and Community Development Minister Rohani Abdul Karim said on Friday she wants the five teenagers allegedly involved in the death of T. Nhaveen to be charged as adults.

"I urge for this case to be dealt under the Penal Code and not the Child Act," she told reporters outside the wake held for Nhaveen at the Batu Gantung funeral parlour on Friday.

Rohani teared up as she spoke, saying that she was a mother too.

"The one thing his mother asked me was this to be the last case and not let it happen to anyone else's child.

"She is a single mother and they were a close family," she said, adding that the family had been given emergency aid to help with funeral expenses.

Earlier, Rohani was seen consoling Nhaveen's mother D. Shanti, who urged for justice to be served.

"My son is dead. Don't let this happen to anyone else's child," she said through tears.

Nhaveen's funeral will be held at 2pm Friday at the Batu Gantung crematorium.

Section 97 of the Child Act 2001 states that a person cannot be sentenced to death for a crime they committed as a child, which is defined as anyone under the age of 18.

Under Section 302 of the Penal Code, however, a person found guilty of murder faces a mandatory death penalty.

The case was initially being investigated under Section 148 of the Penal Code for rioting with weapons.

T. Previin was wheeled out of the operating theatre after surgery to his right eye.

Previin's family could not bear to tell him that his best friend had died. His uncle, M.G.R. Devan, said Previin was still sedated.

"He is only half-conscious now so we will tell him later. My brother (Previin's father) made the decision not to tell him yet," said Devan.

One of the attackers had hit Previin in the face, possibly with a helmet, and fractured a bone just beneath his eye, leaving it fully bloodshot since the attack on June 10.

Nhaveen's uncle R. Thiyagarajan asked for some privacy for the family.

"Please give our family a moment. We were hoping for a miracle after all our prayers and candlelight vigil," he said in a voice thick with grief.