SEPANG (THE STAR/ASIA NEWS NETWORK) - Malaysian authorities are confident they would be able to question Swiss national Andre Xavier Justo after he has been charged in court in Thailand.

Inspector General of Police Tan Sri Khalid Abu Bakar said this following his meeting with his Thai counterpart in Bangkok.

Justo is in jail in Bangkok in connection with trying to blackmail his former employer, PetroSaudi ,which is entangled in a huge scandal involving debt-ridden 1Malaysia Development Berhad (1MDB). 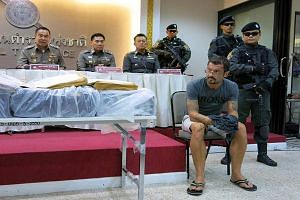 I was offered $2.7m for stolen data: Ex-PetroSaudi employee Xavier Andre Justo on the 1MDB saga

Khalid said Gen Somyot explained that talking to Justo before he was charged could affect his prosecution.

"He asked us to give him some time to consult his legal advisers on whether the police here and police there can work together on this," said Khalid.

He added that the Swiss Government was also concerned over the investigations into Justo.

"If he was Malaysian or had committed an offence here, it would not be a problem for us to question him.

"That said, the offence was committed in Thailand but it does have links to our investigations here," said Khalid, adding that he would consult the Attorney-General on how to proceed.

Khalid, who is a member of the Special Task Force probing the 1MDB, said they would most likely be able to question Justo after he was charged.

"Even if we cannot do it police-to-police, we could do it through mutual legal assistance.

"This means that our A-G would be in touch with the Thai prosecutors to help us in our investigations."

When asked how a Singapore journalist was able to interview Justo while he was in Thai custody, Khalid said he was unsure about it.

"I was told by my counterpart that no one else had questioned Justo other than their personnel. I am not sure if the media had talked to him there," he said.

In an interview with The Straits Times published on Friday, Justo had claimed that he was promised US$2 million (S$2.7 million) in exchange for data he stole from his former employer. He also told the newspaper that he was never paid what he was promised by a prominent Malaysian businessman.

Justo, who gave the interview inside the Bangkok Remand Prison, also claimed that a group he had met in Singapore - including Sarawak Report editor Clare Rewcastle-Brown- had tampered with the data he had given them.

He alleged that those he met had talked about using the documents "to try to bring down the Malaysian government", adding that they also referred to plans to "modify the documents".