KUALA LUMPUR - The Malaysian government is looking to buy out all landowners in Kampung Baru to redevelop the historic Malay enclave in downtown Kuala Lumpur, which is on prime land close to the Petronas Twin Towers.

Federal Territories Minister Khalid Abdul Samad told a news conference in Putrajaya that if the landowners agreed, it could cost the government between RM6 billion (S$2 billion) to RM10 billion, Malaysiakini news site reported him as saying.

He said a buyout would ensure a more organised and thorough redevelopment in Kampung Baru, or New Village in Malay.

The area, consisting of many low-rise brick and wooden homes, old flats and shophouses, sits just 500m from the Twin Towers.

Mr Khalid's offer wasn't the first time that a sitting Malaysian government or a developer had tried to take over the place and redevelop the plot of some 121ha - or about the size of 170 football fields.

Past offers were abandoned as many land owners, who mostly own small plots of land for their homes, were unwilling to sell.

Previous news reports say there are 5,300 landowners in Kampung Baru and they together own 1,355 lots, meaning some lots have more than one owner as the land was passed from one generation to the next. 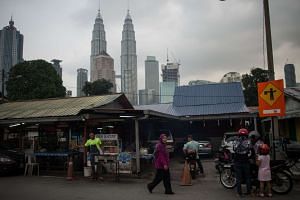 The area is gazetted as 'Malay reserve land', meaning only Malaysian Malays are allowed to buy land or housing units there.

Kampung Baru is known to Malaysians as the heartland of Malay political activism centred on its main mosque, with troubled Malay leaders gathering there in order to raise support from the community.

Mr Khalid said that to carry out the buyout, the government needs to resolve the issue of funding.

"If everyone wants cash, and no one wants apartments (in exchange for their land), which is the worst case scenario, then it may need between RM6 billion to RM10 billion," he said, as quoted by Malaysiakini.

According to Khalid, the government is exploring the option of giving landowners a mix of cash and in-kind payouts, such as in the form of apartments.

He said: "It is quite embarrassing to show foreign guests 'this is a Malay area' (in the heart of the city) that is like a squatter village, even though the land is very valuable, and the owners should be considered millionaires," he said, as quoted by the news site.

He said 80 per cent of landowners he had met agreed with the government's redevelopment plan.

In 2015, an entity called Kampung Baru Development Corp launched a project to develop 17,500 residential units that can accommodate up to 77,000 people within Kampung Baru. A report in the Malaysian Reserve newspaper in September last year said there had been no significant progress in that project.