KUALA LUMPUR - Malaysia has received an application from India to extradite controversial Islamic preacher Zakir Naik, an Indian national, but is keeping to its decision not to send him back, a Malaysian Cabinet minister said on Friday (June 28).

Foreign Minister Saifuddin Abdullah said: "We have received the note (on the extradition application) from the Indian government. I don't remember when, but we have received it."

"For now, we do not have any new decision, we still hold to our original decision," he said, in response to a journalist's question on recent comments by Prime Minister Mahathir Mohamad that Malaysia won't extradite Mr Zakir.

The 53-year old preacher is wanted by New Delhi to face money laundering charges. He has espoused controversial views in his lectures and videos when answering issues linked to Hinduism with his puritan brand of Islam.

Mr Zakir is a popular figure in Muslim-majority Malaysia and has been granted permanent residency status in the country. Previous news reports say he is also a citizen of Saudi Arabia.

In October 2014, he was charged by India's National Investigation Agency with inciting terror and delivering hate speeches.

But Tun Dr Mahathir on June 10 said he won't send Mr Zakir back to India even if requested by New Delhi. 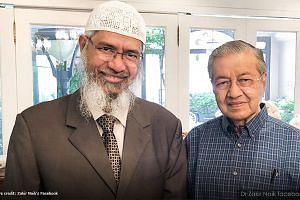 Wanted in India, fiery Islamic preacher says he has not broken any law

The Premier likened his stance to how Australia declined to send back a Malaysian fugitive, Sirul Azhar Umar, as Canberra was worried that the man would be hanged in Malaysia.

Sirul, a former Malaysian police commando who was sentenced to death in 2015 for the murder of Mongolian model Altantuya Shaariibuu, managed to escape to Australia while on release pending appeal. Australia has refused to send him back to Malaysia, which practises capital punishment.

Asked about Mr Zakir on June 10, Dr Mahathir said: "Zakir in general feels that he is not going to get a fair trial (in India)."

Bangladesh in 2017 suspended a television channel that featured Mr Zakir after the media reported that militants who attacked a Dhaka cafe, killing 22 people, were admirers of him.