KUALA LUMPUR (THE STAR/ASIA NEWS NETWORK) - Malaysian police have arrested two men and are looking for three more suspects who stopped and inspected a police car at a by-election in Negeri Sembilan.

The men were believed to have asked the men in blue inside the Mobile Patrol Vehicle (MPV) to open the car boot in search of alleged stuffed ballots. They found none.

A video of the incident in the Rantau by-election have gone viral, leading to calls for police to take action.

In the video, one of the men was wearing the vest of the ruling Pakatan Harapan (PH) alliance.

Acting Umno president Mohamad Hasan retained the Rantau state seat in the by-election held on Saturday (April 13) with a comfortable majority, beating off a challenge from Dr S. Streram from Parti Keadilan Rakyat.

In the Negeri Sembilan capital of Seremban, acting state police chief Mohamad Mat Yusop said police have detained two of the five men who were identified as having stopped and inspected the patrol car.

"They were detained at about noon at separate locations. The first suspect is a 52-year-old car salesman, while another is a 36-year-old lorry driver," he said.

Police are looking for three others.

Commenting on the incident, Datuk Seri Mohamad said it occurred at about 6pm in front of of a school, soon after polling closed.

"The MPV was there to facilitate traffic in the area and did not enter the school in the first place," he said. 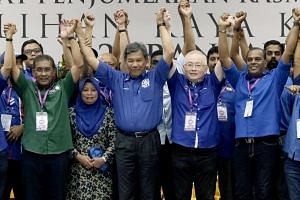 He said the five men, who suspected the police unit of carrying ballot boxes, had no right to stop and inspect a police vehicle.

"At the same time, my men should not have allowed it to happen, but they did so, as they do not want to cause a commotion. When the car boot was opened, only a medical case and security equipment were there," he said.

"Don't take matters in your own hands. The police personnel were performing their official duties, which is to safeguard the safety of all," Datuk Seri Abdul Hamid said in a statement on Sunday.

"If anyone has any information on any criminal incident, please report to the police," he said.