KUALA LUMPUR (BLOOMBERG) - Malaysia plans to halt all expansion of oil palm plantations this year as it seeks to dispel the oil's reputation as a driver of deforestation.

The world's second-largest producer after Indonesia will cap the area at around six million hectares, Minister of Primary Industries Teresa Kok said in an interview on Friday (March 1).

That's up from 5.85 million hectares at the end of last year, which will give some leeway to growers who are in the middle of replanting or who have already bought land, she said.

The move comes as producers intensify their fight against simmering anti-palm oil sentiment and allegations that the crop destroys tropical rainforests that are home to endangered animals such as the orangutan.

While the negative sentiment against palm oil has existed for decades, it worsened when growers expanded plantations in Indonesia and Malaysia.

"Now we are responding to a lot of accusations and rectifying it," Ms Kok said.

The proposal, which will be put to the Cabinet for discussion by March, will require commitment and cooperation from state governments as certain land issues are under their jurisdiction, Ms Kok said at her office in Putrajaya.

Malaysia will focus on boosting the productivity and yields of existing palm trees, she said. Palm oil futures in Kuala Lumpur added as much as 1.3 per cent on Monday after jumping 3.2 per cent on Friday. 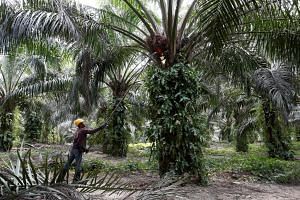 Holidaying in Malaysia? Why not visit its controversial palm oil farms

The European Union Commission in February submitted a Delegated Act that classifies palm oil from large plantations as unsustainable, and suggests that the oil be excluded from the bloc's biofuels target. That could hurt top producers in Indonesia and Malaysia which are struggling to improve demand for the controversial oil used in everything from soap to chocolate.

Malaysia has called the draft law discriminatory and potentially detrimental towards palm oil. The country is gearing up for a long battle as there's risk that the "end game" in the EU is to completely ban palm oil, Foreign Minister Saifuddin Abdullah said last month.

The world's largest growers are joining forces. The Council of Palm Oil Producing Countries, whose members Indonesia, Malaysia and Colombia produce about 90 per cent of global supply, will jointly challenge the Bill through bilateral consultations, as well as through the World Trade Organization and regional grouping Asean.

The council said the law uses a "scientifically flawed" concept that targets palm oil and "makes no attempt to include broader environmental concerns" linked to other vegetable oils.

Some environmentalists link palm oil to the slashing and burning of rainforests in South-east Asia and laud the EU's plan to snub it, but there are critics who say it could have the opposite effect.

Turning away from palm oil could push consumers towards other vegetable oils that produce less yield per hectare, according to Bloomberg Law.

"The series of discriminatory policies on palm oil taken by the EU is unfair. I think the whole world can see that," Ms Kok said. "They are just trying to use the environment as a farce to discriminate against palm oil."

Malaysia will send a team of scientists to challenge the methodology that shaped the draft law, she said.

Ms Kok is also looking to gather support at home. She has launched a year-long "Love My Palm Oil" campaign to support the industry, roped in the private sector to place billboards promoting palm oil, and encouraged tour guides to bring tourists to plantations.

Malaysia is set to have all of its palm estates certified as sustainable by the end of this year, with the government helping smallholders to do so.

It's all about working together and spreading the word from home, Ms Kok said. "It's no more a one-woman or one-ministry show," she said. "The nation should come together."