PETALING JAYA (THE STAR/ASIA NEWS NETWORK) - The Malaysia Today portal has been instructed by the Malaysian Communications and Multimedia Commission (MCMC) to remove three articles it had published about billionaire Robert Kuok.

The portal published the email it received from the MCMC on its site on Monday (March 5). The email had ordered the portal to remove the articles by 10am on Tuesday (March 6).

It stated that the MCMC had received complaints regarding the articles, which were written by blogger Raja Petra Raja Kamaruddin.

The articles that were ordered to be removed were "Robert Kuok wants Chinese rule in Malaysia", "Malaysian Insight funder fingered" and "Robert Kuok's last chance at changing the government".

The MCMC also urged the portal to be more conscious in ensuring that it does not publish news articles that go against the country's laws.

Kuok to act against news site over its allegations 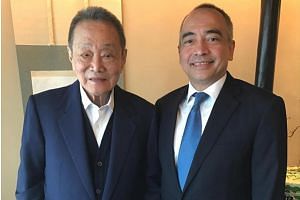 The 94-year-old Hong Kong-based tycoon has refuted the allegations and said he would take action against the news portal for publishing them.

The allegations against Mr Kuok had sparked harsh criticism of the 94-year-old billionaire by senior members of Umno, the Malay dominant party leading the Barisan Nasional (BN) coalition.

After the articles were published, Umno leader Tajuddin Abdul Rahman warned Mr Kuok not to forget his roots and how he emerged as Malaysia's richest man.

Tourism and Culture Minister Mohamed Nazri Abdul Aziz called Mr Kuok a "pondan" (effeminate man) and a coward, adding that he should surrender his Malaysian citizenship. He also challenged Mr Kuok to return to contest in the coming polls.

Those comments led the BN's Chinese component party, the Malaysian Chinese Association (MCA), to respond with its party secretary-general Ong Ka Chuan saying the remarks by the Umno leaders were "regrettable".

Other prominent Malaysian figures had also spoken up recently to defend Mr Kuok.