In this column, the writer says Malaysia should not be complacent amid warning signs of financial trouble ahead.

With the crisis coming so close to home, it is time to contemplate what may unfold in the near future and list measures to respond to each scenario, so that we are not taken by surprise.

The agreement reached with Singapore to postpone construction of the Kuala Lumpur-Singapore high-speed rail (HSR) project until end-May 2020 (with Malaysia paying S$15 million in cost) was an achievement. It allows Malaysia a gap of two years before having to meet the mega project's large expenses.

The next couple of years will be crucial, as the country will be in the midst of managing the "perfect storm" of servicing the trillion-ringgit government debt and preventing the government deficit from ballooning, while facing the challenges of the emerging global financial crisis.

As more discoveries are made of missing money, whether due to the 1MDB scandal or unpaid tax refunds, there is increasing pressure to save money and cut costs to avoid wider deficits.

So the HSR's two-year deferment helps a lot. It may be like kicking the can down the street, but hopefully, the situation will improve by the end of the two years to allow the can to be picked up, especially if during the period, ways are found to cut the overall cost of the project.

Other projects too have to be scrutinised. Besides the East Coast Rail Link and Trans Sabah gas pipeline projects, there are many other projects whose costs have to be examined, and whose implementation can be postponed or cancelled.

Besides the scourge of overpricing and kickbacks, there is the over-riding concern that a financial crisis has to be averted.

Indonesia's Energy Minister last week announced that energy projects worth US$25 billion (S$34.5 billion) and representing half of President Joko Widodo's grand electricity programme, would be postponed or restructured. This is to save US$8 billion to US$10 billion on imports for the projects.

Indonesia is also raising tariffs to 10 per cent on over 1,000 goods in a move to reduce the import bill.

These are some measures the country is forced to take as its economy enters full crisis mode. It could even face a meltdown of the 1998-99 scale. The rupiah fell to almost 15,000 per US dollar, the lowest point since the 1998 crisis.

Indonesia is vulnerable to a financial crisis due to its dual deficits (in the current account and government budget), large external debt and high foreign ownership of equity and government bonds. 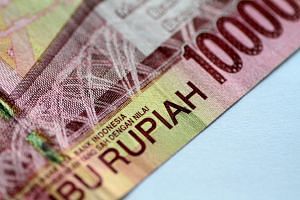 Indonesia raises import taxes on 1,000-plus goods to support rupiah

Indonesia is caught in a vicious cycle, which is typical when financially liberalised countries follow orthodox fire-fighting policies. When the markets perceive that the external reserves could be insufficient to pay for imports, service debts and absorb potential capital outflows, the currency depreciates.

The perception sparks a self-fulfilling prophecy. The fall in currency makes it more difficult for the government and companies to service foreign loans, and also prompts investors to pull out their money.

In such a situation, the government raises the interest rate to incentivise investors to retain their money in the country. Indonesian interest rates have risen by 1.25 percentage points since May.

However, the side effect is that homebuyers and companies find it more difficult to service their mortgage and business loans. Credit slows down, and so does the economy. This in turn causes the currency to drop further, prompting more rounds of interest rate increases, which lead to loan defaults and bankruptcies.

The economy goes into recession, leading to more capital outflows, including by local people. The currency drops again, recession deepens, and the cycle continues.

Indonesia is still at the start of this cycle. Hopefully it will find the policy tools, including unorthodox ones that work, to avoid a long stay in the spiral. But Indonesia is by no means alone. Argentina and Turkey are deep in their crises, and more and more countries are suffering the contagion effect, including South Africa, India, Iran and the Philippines.

Following the 2008-09 global financial crisis that especially hit the United States and Europe, many hundreds of billions of dollars rushed to emerging markets, including Malaysia, in search of higher yields. The liquidity was created by quantitative easing (government pumping money into the banking system) and low interest rates in the US and Europe.

Now the funds are leaving the emerging economies and returning to the US. This is due to the US policy reversing to quantitative tightening, the rise in its interest rates, and fears of an emerging market crisis and a worsening trade war.

Developing countries vulnerable to currency decline, a pull-out of funds and a crisis are those with significant current account deficits, government budget deficits and debts; low foreign reserves; large external debt; and high foreign ownership of local bonds and equities.

Malaysia is so far safe but it is wise not to be complacent. It is not easy to escape contagion once it spreads.

A few warning signs have appeared, such as a narrowing of the current account surplus and significant portfolio investment outflows (both in the second quarter), and a weakening of the ringgit, besides the larger than previously reported government debt and the need to prevent the budget deficit from increasing.

The old Scout motto, "Be Prepared", comes in handy at times like this. It is good to prepare now for any eventuality, so as to avoid being caught by surprise.

Martin Khor is adviser of the Third World Network. The views expressed here are entirely his own. The Star is a member of The Straits Times media company Asia News Network, an alliance of 23 news media entities.