KUALA LUMPUR - Prime Minister Najib Razak has assured the United States that Malaysia is a firm partner in its foreign policy objectives, especially in the fight against the Islamic State in Iraq and Syria (ISIS).

Datuk Seri Najib , who is on a three-day visit to Washington, wrote in an opinion piece published by Washington-based political website The Hill that the Muslim-majority nation shares the US commitment to a "rules-based global order", such as North Korea abiding by UN Security Council resolutions.

Citing "the threats of nuclear proliferation, radicalisation and new and ever-more barbarous acts of terrorism around the globe," he said "nations need firm partners and friends".

"President Trump and I will be marking six decades of strong bilateral ties when we meet at the White House on Tuesday (Sept 12), but the relationship between our nations goes much further back in history. Our rubber, for example, was crucial for the growth of the American automobile industry, and that demand spurred our own economic growth - an early example of a mutually beneficial partnership between our countries,'' Mr Najib said.

"What underpins decades of friendly, productive and cooperative relations are the deep-seated values we share. Our commitment to the fight against radicalisation and terror is something we feel in our hearts, as well as planning and implementing our policies coolly and rationally.

Mr Najib's comments come as Malaysia is seen leaning towards China, whose influence in South-east Asia has been growing compared to America's.

"There is no better example of this partnership than our shared efforts against violent extremism. The world changed on September 11, 2001, and America has suffered further attacks on its soil that were inspired by that same false and poisonous ideology,'' the prime minister said.

"There has, so far, been only one successful Daesh-linked attack in Malaysia (and, thankfully, no fatalities), but that has not been for want of trying. Your enemy - those who blaspheme against the religion of a majority of Malaysians by claiming their terrorism is Islamic - is our enemy, too," he added, using the Malaysian term for ISIS.

"We have fought Daesh through the promotion of moderation, and through a deradicalisation program that has had a 90 per cent success rate. We have fought this through intelligence sharing and counter-terrorism measures in our region and beyond. I am proud to say that the Royal Malaysian Police has thwarted at least 13 major terrorist attacks since 2012.

"And we have fought this through being a partner in the U.S.-led global coalition to defeat Daesh, and through the strategic dialogue between our Ministry of Defence and the Pentagon. Rest assured, Malaysia will always stand shoulder-to-shoulder with America on this vital mission to eliminate a terror group whose acts sicken all of civilised humanity,'' said Mr Najib. 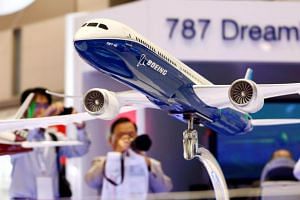 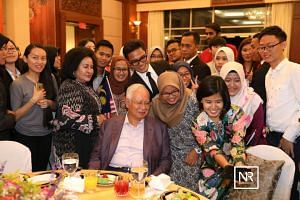 On Monday night, Mr Najib and his wife Rosmah Mansor met some 300 Malaysians at a dinner at the Malaysian Embassy.

In his speech, he said Malaysia is a rising country with a great deal of value propositions for the United States that are mutually beneficial to both countries.

“We have not come here to ask for money. We have come to show that we are a rising star that has achieved so much,” said the Malaysian leader.

Mr Najib will meet Mr Trump on Tuesday US time at the White House for wide-ranging talks expected to touch on issues including North Korea's nuclear threat, the Rohingya humanitarism crisis in Myanmar, terrorism, trade and Asian maritime disputes.

The Malaysian leader will also meet Vice-President Mike Pence, Secretary of State Rex Tillerson and Defence Secretary James Mattis, and members of the US Senate Foreign Relations Committee. He will also witness the signing of a memorandum of understanding between Malaysian Airlines and Boeing Aircraft Corporation.