KUALA LUMPUR - The Malaysian government has officially declared it will not be ratifying a United Nations human rights treaty, after facing anger from Malay and Muslim organisations who are worried about the dilution of their rights.

"The Pakatan Harapan government will not ratify the ICERD," said a statement issued by the Prime Minister's Office, as quoted by the Malaysia media.

ICERD refers to the UN's International Convention on the Elimination of All Forms of Racial Discrimination.

"The government will continue to defend the Federal Constitution which includes the social contract agreed upon by representatives of all races during the founding of this nation," the statement added, as quoted by Utusan Malaysia and Free Malaysia Today news sites on Friday (Nov 23).

The debate over the ratification of ICERD grew louder in the weeks after Prime Minister Mahathir Mohamad spoke in September at the UN General Assembly, where he said his new government would ratify all remaining UN human rights conventions as part of its international commitments.

Malaysia is also taking steps to remove the death penalty.

The main opposition parties, Umno and Parti Islam SeMalaysia (PAS), are strongly united against the issue, and are planning a massive demonstration in Kuala Lumpur over ICERD on Dec 8. 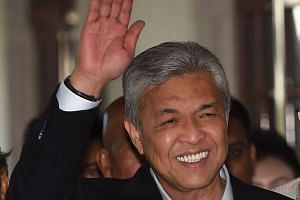 Those opposed to the convention said ratifying ICERD would weaken the rights of Malays and Malay royalty, and dilute Islam's position in Malaysia.

The two top leaders of the ruling Pakatan Harapan coalition, Tun Mahathir and Datuk Seri Anwar Ibrahim, over the weekend signalled that the government is unlikely to ratify the treaty anytime soon.

Once ratified, the convention requires the signatory state to set up legislation that prohibits racial discrimination and related acts.

This could affect Malaysia's longstanding bumiputera policy that reserves education and job spots for Malays and other indigenous races. There are also concerns that this would also weaken the primacy of Islam in the country and the special position enjoyed by the nine Malay royal houses.

Malaysian police, meanwhile, said on Friday that they are keen to interview several political leaders, after messages linked to ICERD and them were spread on social media.

Umno president Ahmad Zahid Hamidi last week, speaking at a joint rally over ICERD in Perak, told the crowd: "Don't wait until the Malays run amok. But if our warning goes unheeded, Umno and PAS will unite.

"This is not a mere warning; don't play if you don't want the amok to happen."

The Prime Minister said it would be almost impossible to change the federal Constitution to accommodate ICERD, as this would need support from two-thirds of MPs in Parliament.

The ruling Pakatan Harapan coalition that he leads has 127 out of the 222 seats in Parliament. A minimum of 148 votes are needed for a two-thirds majority to change any part of the Malaysian Constitution.

"Only with the support from the opposition can we have a two-thirds majority, and even then, government members themselves may not support (it). So I feel that it's almost impossible for us to achieve the two-thirds majority necessary," Dr Mahathir said.

Mr Anwar, speaking to reporters after the annual congress of Parti Keadilan Rakyat that he leads, said on Sunday that he believes it is not the right time to ratify ICERD.

"This is a new government; we need to make sure Pakatan Harapan and the Prime Minister are strong and receive the support of the people. For me, it (ratifying ICERD) can be postponed," he was quoted as saying by Malaysiakini news site.