He said the civil service, which now counts 1.7 million employees compared to 1 million in 2003, is a drain on the government's coffers.

"The size of the civil service has grown too big and become worrisome for a very long time as it continue to increase the government's financial burden and at the same time, reduces the allocation for development purposes," he was quoted as saying in parliament by The Star.

Citing the example of Telekom Malaysia (TM), which was corporatised in 1987, Dr Mahathir said privatisation would save the jobs of civil servants.

"(TM's) employees were transferred to a private company, reducing the number working in the public sector. At the same time, the employees received better salary packages.

"We believe that this strategy is still relevant to address the issue of the size of civil service, that is seen to have huge financial implications and is a burden."

The Prime Minister said if the situation was not controlled, the high cost of management expenditure for the government will continue to take a big chunk from the country's national budget each year and will slow down economic growth. 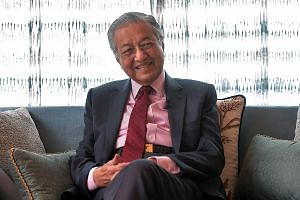 He blamed the previous government for the rising expenditure by increasing civil servant salaries indiscriminately in an effort to buy their loyalty.

"We also noted that the previous government set up various bodies with huge salaries that could reach tens of thousands of ringgit a month.

"All that will be stopped as their services are not actually needed," he said.

He said the civil service's productivity can be improved by reducing duplication, wastage and distributing resources more efficiently through the use of technology.

"The government will ensure that those affected will be given working opportunities in other economic sectors before opting to reduce the size of the civil service," he said.

As a press conference later, Dr Mahathir said TM's workers had a choice whether to go to the private sector or not.

"They could also choose to stay back in the public sector. But they had to accept certain conditions, such as the salary level," Dr Mahathir said according to the Malay Mail.