"The elections will take place no later than 180 days from now."

"Those who say that the elections will take place later than that are out of touch with reality," he said at the opening of the 46th Gerakan National Delegates Conference in Cheras on Sunday (Nov 12).

On the Gerakan's chances in the 14th general election, he said the party can win big and even wrest Penang from opposition alliance Pakatan Harapan if its members work hard.

"It is not impossible for the pendulum (of political support) to swing back towards Gerakan's favour," said Dr Ahmad Zahid. 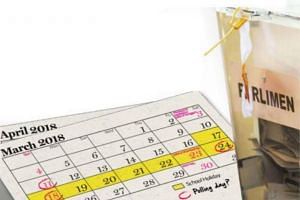 Dr Ahmad Zahid also took aim on Sunday at the Penang state government which he said cannot deny all responsibility for the severe floods which hit the island recently.

Penang is led by opposition Democratic Action Party (DAP). The DAP is part of Pakatan Harapan.

Dr Ahmad Zahid said better urban planning and greater care of the environment on the island could have reduced the severity of the floods.

"Yes, for 17 hours the rain fell, but if development was planned well, then we would not have seen such a (severe) flood," Dr Ahmad Zahid said in his speech on Sunday (Nov 12).

He said it was pointed out that the management of development in Penang was not done in accordance with advice from the Department of Environment, reported The Star newspaper.

Dr Ahmad Zahid said the recent floods, the worst to hit Penang, saw everyone, regardless of his or her political belief, coming together to help victims and that it was a good sign of harmony in the country.