As at 2.55am on Thursday, in the erstwhile BN-controlled states of Perak and Kedah, the race for state assembly seats did not throw up clear winners - leaving the control of the state subject to future political negotiations.

Parti Islam SeMalaysia (PAS), meanwhile, seized control of Terengganu, while winning more than half the seats in Kelantan, where it already runs the government.

In Negeri Sembilan, PH won 20 of the 36 seats. The Chinese-dominated Democratic Action Party (DAP), a member of PH, which won at least 11 of the PH seats in Negeri Sembilan, was quick to assure voters that control of the west coast state would remain in the hands of the majority Malays.

DAP organising secretary Anthony Loke told reporters on Wednesday night: "On behalf of DAP, although we won 11 seats, as promised, we will still support a Malay Muslim candidate as Menteri Besar (chief minister)." 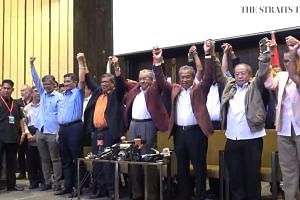 The small state was long been controlled by incumbent Barisan Nasional coalition. After the 2013 election, BN commanded 22 seats in the assembly.

In the two states with hung parliaments, Perak and Kedah, PAS, through alliances it wishes to make in the future - will get to decide which party will eventually govern. In Perak, PH won 29 of the 59 seats, while BN won 27. PAS bagged the last three.