SAWAI, SARAWAK (REUTERS) - One answer to why Malaysian Prime Minister Najib Razak is heading for another victory in next week's general election can be found in the remote village of Sawai, tucked between vast palm oil plantations and a river in Sarawak.

Few of Sawai's residents have heard of the 1Malaysia Development Berhad (1MDB), let alone the multi-billion-dollar scandal surrounding the state fund that has dogged the country's prime minister since 2015 and fuelled opposition to his bid for re-election on May 9.

But everyone here knows about the cash handouts, fishing and farming subsidies, crates of mineral water and life jackets for children who take river boats to school - and they know all that comes from Datuk Seri Najib's long-ruling coalition Barisan Nasional (BN).

"We are 100 per cent Barisan," said villager Usup Sirai. "The government has done a lot for us. If we support other people, it would not have the same outcome as supporting the government."

BN is facing its toughest election yet thanks to a challenge led by Malaysia's former strongman, Tun Dr Mahathir Mohamad, a one-time mentor of Mr Najib and now his fiercest critic.

But the chances of Mr Najib losing are seen as slim, in large part because of villages like Sawai that faithfully vote for BN.

Sawai is part of the Igan parliamentary constituency, which BN won uncontested in 2008 and took again in 2013 with 87 per cent of the votes. 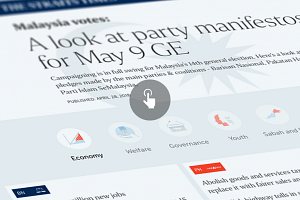 Malaysia votes: A look at party manifestos for May 9 poll

It helps that votes in sparsely-populated rural areas carry more clout than votes in cities, where popular disgust over corruption and the cost of living favour the opposition.

Igan, with just 19,592 voters, is the country's smallest constituency in terms of electorate size. By contrast, Bangi, an urban constituency in Selangor state held by the opposition, is the biggest with 178,790 voters. Both elect one lawmaker.

Two-thirds of the constituencies in the East Malaysia states of Sabah and Sarawak are rural or semi-rural, which means they are important for BN to secure a parliamentary majority even if it loses the popular vote, as it did in the 2013 election. The two states together account for a quarter of all parliamentary seats.

Critics accuse Mr Najib - as they did Dr Mahathir before him - of gerrymandering to tilt elections in his favour, and point to a recent redrawing of electoral boundaries as further evidence.

The Election Commission insists it is independent and says its electoral map changes in March did not favour BN. The government says there was no political interference.

He said the Malaysia Agreement of 1963, under which Sabah and Sarawak joined Malaya and Singapore to form Malaysia, stipulated that the two states get representation in Parliament that reflects their size. Sabah and Sarawak account for about 60 per cent of Malaysia's land mass.

As a result, nine of Malaysia's smallest 10 parliamentary constituencies in terms of electorate size are in Sarawak.

Mr Baru Bian, an opposition leader in Sarawak, says he struggles to win voters over in rural areas, where sometimes he has to explain even the concept of elections.

The development support is indeed impressive, running from prayer halls and river jetties to schools and solar panels.

Take Nanga Singat, an Igan village without electricity that is 90 minutes by boat from the nearest town. Its 500 residents, who mostly live in the same wooden longhouse, use purification tanks installed by BN to make river or rain water drinkable.

"If we vote for the opposition, maybe they will let the longhouse suffer. So we just follow and vote BN," said Mr Francis Kiah Pengarah, village headman for the past 40 years.

Villagers around him nodded and said they would take the headman's advice on who to vote for. They were unaware that Dr Mahathir was now leading the opposition, but dismissed the 92-year-old as too old.

Mr Najib, on the other hand, is popular for introducing BR1M, a cash handout for the poor, and for launching a coastline highway that, when completed, will connect Sabah and Sarawak.

Residents in nearby Nanga Semah village said a local BN official recently gave each longhouse RM1,500 (S$508) for a harvest festival. In 2013, BN chartered a boat for villagers working in towns to return home to vote, and those who showed ink-marked fingers proving they had cast a ballot got RM20, they said.

Asked which party she supported, a 66-year-old who gave her name only as Gata pointed to a framed photograph of Mr Najib. "It's because of that man, we got BR1M. We like him," she said.