SINGAPORE (BLOOMBERG) - Malaysia has finally scrapped three China-backed pipeline projects after halting work on them following the shock elections in May that saw an opposition alliance assuming power for the first time in the country.

The plans comprise two oil and gas pipelines that cost more than US$1 billion (S$1.4 billion) each as well as a US$795 million pipeline that would link the state of Melaka to a refinery and petrochemical plant in the state of Johor, the paper reported.

Mr Lim did not disclose the cancellation fees Malaysia would incur for cancelling the pipeline projects but said that lawyers were handling the matter, the report said.

The cost-cutting efforts are aimed at tackling the country's liabilities which have surged above RM1 trillion (S$333 billion) due to state guarantees on borrowing by state investment firm 1MDB, which is at the centre of a multibillion-dollar scandal. 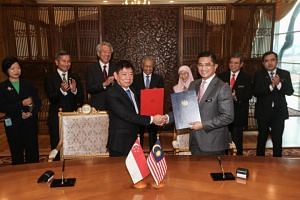 Mr Lim also told the Financial Times that another China-backed project - the East Coast Rail Link - was under review. That project is being built by China Communications Construction Co.

In a visit to Beijing last month, Tun Dr Mahathir warned against new 'colonialism' and called for free trade that was also "fair".

Last week, Malaysia and Singapore agreed to postpone a multibillion-dollar high-speed rail project between the two countries until the end of May 2020.