The man best known for holding two coconuts while standing in seawater to save Malaysia from a North Korean nuclear strike failed to register for election in Perak state on Saturday (April 28) despite an earlier declaration of his candidacy.

Mr Ibrahim Mat Zin, 68, who used to go by the moniker of "raja bomoh" or shaman king, once used a "magic carpet" and walking stick to help locate the missing Malaysia Airlines flight MH370.

On Saturday, he did not appear at the nomination centre in Bagan Datuk constituency, where he had earlier announced he would contest.

Datuk Seri Zahid Hamidi told reporters after registration was closed: "Ibrahim Mat Zin …is a bankrupt, so he is not qualified to submit his nomination.

"I actually welcomed him to contest in Bagan Datuk. The more the merrier. We waited for his presence today… But he disqualified himself."

Mr Zahid has been the member of parliament at Bagan Datuk since 1995 and won the last election in 2013 by beating his PRK opponent Madhi Hasan by 2,108 votes. 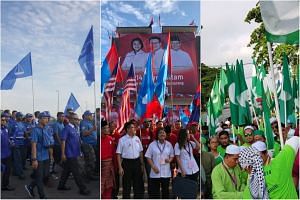 It was in that same election that Barisan Nasional edged out the opposition Pakatan Rakyat coalition in Perak by 31 seats to 28.

Bagan Datuk is a seaside constituency in Perak known for coconut plantations and fishing. Officials have been trying to raise its potential as a hub for industry and tourism, while there are early discussions about building a tunnel under the Straits of Malacca that would linked it with Sumatra in Indonesia.

Mr Zahid has reportedly said that he would like the coming election to be his last.

He was made deputy prime minister in 2015, filling the role of Tan Sri Muhyiddin Yassin who was axed from the Cabinet after speaking out about alleged corruption involving funds from state fund 1Malaysia Development Berhad. Mr Muhyiddin Yassin is spearheading opposition efforts this election as president of Parti Pribumi Persatu Malaysia, a component party of Pakatan Harapan coalition.

Both opposition challengers in Bagan Datuk are retirees, and contesting in their first election.

PAS candidate Ata Abdul Muneim, 60, told The Straits Times that winning is "not easy, but it's not impossible."