YONG PENG - The main road through the Johor town of Yong Peng is lined with blue Barisan Nasional (BN) flags and banners of its candidate Wee Ka Siong, who is seeking a fourth term.

But the image of BN chief, Prime Minister Najib Razak, is hardly seen in campaign posters around the district, part of Ayer Hitam constituency.

Instead, a huge billboard depicting Dr Wee alongside Datuk Seri Najib and his wife Rosmah Mansor sprung up on Saturday afternoon, after nominations closed.

It was put up by the opposition, and it said: A vote for Wee Ka Siong is a vote for Najib and Rosmah.

In less than 24 hours, Malaysia's Election Commission (EC) tore the billboard down, citing new guidelines that limit campaign images to that of the area's candidate as well as party and deputy party chiefs of his registered party. Datin Seri Rosmah is not a candidate.

Opposition pact Pakatan Harapan (PH) candidate Liew Chin Tong opposed the EC action, and supporters spray painted over Madam Rosmah's photo, but the EC insisted that the entire board be taken down.

Mr Liew, a key member of the Chinese-majority Democratic Action Party (DAP), argued that BN candidates should not avoid talking about a person central to political scandals. The US Justice Department has claimed that her jewellery purchases were linked to 1MDB funds. 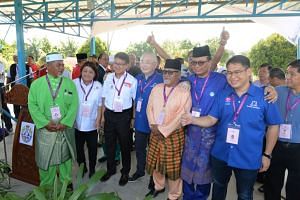 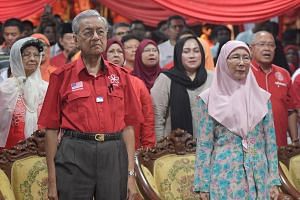 "I've got many of such posters, minus Rosmah's face, which will be put up in the area," said Mr Liew, who represented neighbouring Kluang constituency but moved to Ayer Hitam to take on three-term incumbent Dr Wee, a Minister in the Prime Minister's Office and deputy president of the Malaysian Chinese Association (MCA).

"We don't stoop so low," he told reporters, emphasising that the campaign should be focused on promises and policies by candidates rather than defamatory allegations. He added that the opposition billboard was against the Election Offences Act for promoting ill-will.

On Sunday, bystanders watching EC officers tearing down the billboard shook their heads. "This is sabotage by BN," said storekeeper Amin Badar, 49.

Mr Liew decried double standards over the move, and cited a billboard of MCA president and Transport Minister Liow Tiong Lai with Chinese President Xi Jinping, lauding MCA's ties with the Chinese Communist Party and how people stand to benefit from the Belt and Road Initiative.

"Why is it that BN has a billboard with Xi Jinping in it? He's not a candidate," said Mr Liew. Other boards show MCA leaders and Mr Najib with Alibaba mogul Jack Ma.

Dr Wee responded by saying the boards' content bore no negative messaging but promoted achievements, and added that the opposition could do the same as well.

BN's reputation in its stronghold Johor has been affected by discontent with the national leadership over the Goods and Services Tax and scandals, and observers suggest this could be why its candidates are downplaying images of the premier.

But the opposition's strategy entails candidates like Mr Liew telling voters at rallies - and through billboards - that voting BN equals to voting for Mr Najib, no matter how much they like their local candidate.

"This is nonsensical," Mr Liew said of the EC move, as he stood in front of the torn down billboard. "I'm going to put up more banners. They can take down everything".