LANGKAWI - Former Malaysian prime minister Tun Mahathir Mohamad will be contesting in Langkawi in the May 9 general election, turning the popular holiday island and Barisan Nasional (BN) ruling coalition's stronghold into a battleground to watch.

The announcement that Dr Mahathir, 92, will be fielded in the parliamentary seat of Langkawi was made late on Sunday (April 15) by opposition leader Dr Wan Azizah Ismail at a political rally on the island. The rally was attended by other senior opposition leaders and several thousand supporters, near the international airport.

"With great pride and the prayers for our victory, I would like to announce that the candidate for Langkawi is Tun Dr Mahathir," said Dr Wan Azizah, president of Parti Keadilan Rakyat.

The announcement ended months of speculation on where Dr Mahathir, chairman of the opposition alliance Pakatan Harapan (PH) and its prime minister candidate, would be fielded.

There was speculation that he would contest in his old Kedah seat of Kubang Pasu, or in Malaysia's administrative capital of Putrajaya.

Known as the Jewel of Kedah, Langkawi will be expecting a three-cornered fight between BN, PH and opposition Parti Islam SeMalaysia (PAS).

Located some 30km off Kedah, the parliamentary constituency comprises Langkawi island and more than 100 smaller islands.

The Malay-majority island of 100,000 people has never fallen into the hands of the opposition.

In the 2013 general election, incumbent MP Nawawi Ahmad defeated a candidate from Parti Keadilan Rakyat with an 11,861-vote majority, after winning 67 per cent of the vote.

Lunch with Sumiko: Mahathir Mohamad's unfinished business as Malaysia gears up for election 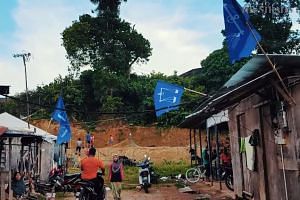 But the Alor Setar-born Dr Mahathir is banking on voters in his Kedah home state to win the seat as part of a larger effort to topple the government of Prime Minister Najib Razak.

Analysts say that the odds appear to be in Dr Mahathir's favour in Langkawi, which is about two-thirds the size of Singapore.

He worked as a medical officer on Langkawi in the 1950s and was one of the few people with a car on the island then.

He later earned the islanders' respect for transforming a backwater island into a popular tourist hub. He declared the island a duty-free zone in 1987, and built the Langkawi international airport and jetty in the Kuah main town a year later.

"Tun M is so popular in Langkawi as a person responsible to bring development to Langkawi from a fishing village into one of the main tourist attractions in Malaysia," Assoc Prof Mohd Azizuddin Mohd Sani from Universiti Utara Malaysia told The Straits Times, referring to Dr Mahathir by his nickname.

BN has yet to announce its candidate to fight Dr Mahathir. Incumbent MP Datuk Nawawi who won the seat in 2013 was previously a state assemblyman for Kuah in Langkawi for two terms. He is Langkawi Umno's division chief and chairman of national railway Keretapi Tanah Melayu Bhd.

For PM Najib, while Dr Mahathir might be an idol on the holiday island, he said on a visit to Langkawi last Thursday that the former premier is no longer in the mainstream. "He is now allied with men whom he jailed, those who denounced him and whose party used to call him a racist," Mr Najib he was quoted as saying by The Star. He added: "He has made so many U-turns. His mind is stuck in the past."