This includes RM2 billion to ease debts owed to Felda by settlers, and a RM1 billion injection to cover a cash flow deficit, confirming a Straits Times report in March that the troubled agency would be bailed out.

The government is also providing a RM2.5 billion loan so that Felda can restructure its borrowings as well as RM730 million in grants for housing and living costs for settlers.

"Felda's debts rose 1,100 per cent from RM1.2 billion in 2007 to RM14.4 billion in 2017, while the value of its assets only increased by 107 per cent," Economic Affairs Minister Azmin Ali said in Parliament when tabling a White Paper on Felda, the Federal Land Development Authority.

He also said that the agency, which operates some of the world's largest oil palm plantations, saw its profits fall 590 per cent over the same period.

Meanwhile, Felda's cash balance fell from an average of RM2.5 billion between 2007 and 2011 to just RM400 million in 2017. As at May 9 last year, the date of the general election which resulted in a change of government, the agency's cash balance was RM35 million.

“Unfortunately the Felda settlers are suffering because the previous government has stolen their money, so we have no choice but to overcome the difficulties of the Felda settlers,” Prime Minister Mahathir Mohamad told a news conference on Wednesday.

The aid will benefit the 112,635 Malay families and their descendants on Felda estates, commonly referred to as settlers, whose livelihoods depend on cultivating cash crops under the land development scheme. 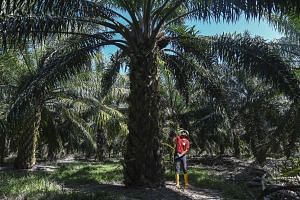 Malaysia set to bail out Felda, another debt-laden agency

White Paper on Felda's woes due in Parliament

Felda's financial woes began after a controversial RM10.5 billion listing of its commercial arm Felda Global Ventures Holdings (FGVH) in June 2012 on Bursa Malaysia, the largest in the world that year after Facebook's initial public offering.

The listing gave settlers a windfall of RM15,000 a family and they were offered an interest-free loan to take up FGVH shares. FGVH shares have since lost two-thirds of their value, leaving settlers with little to show for their investment.

A combination of lower palm oil prices, poor plantation management and financial mismanagement at Felda has been blamed for Felda's fortunes going south.

Datuk Seri Azmin said that former prime minister Najib Razak had used RM2.7 billion, part of the RM6 billion which Felda had earned from the listing, to shore up political support.

One such purchase was that of a hotel in Kensington, London, transacted at RM331 million, three times the actual price of the property.

Another loss-making deal was Felda's purchase of a 37 per cent stake in Indonesian planter PT Eagle High Plantations Tbk for RM2.3 billion from the Rajawali Group which is controlled by Najib's associate Peter Sondakh, now worth just RM500 million.

Mr Azmin said he has also filed a motion against Najib for breaking a Parliament embargo on the Felda White Paper by posting parts of it on his Facebook page on Tuesday.

In his post, Najib had denied any wrongdoing and dismissed allegations that Felda incurred losses with the Eagle High purchase. “We have the facts on our side. Everything was done in an objective manner,” Najib was quoted as saying by The Star on Tuesday night.

Felda director-general Othman Omar lodged a police report on Tuesday saying that the Eagle High purchase price was deliberately inflated by almost 450 per cent to RM2.3 billion, and that the purchase was made on Najib's orders.

On Wednesday, Najib posted again on Facebook, saying that the RM2.7 billion allegedly used to obtain political support was given to settlers as bonuses and handouts.

Nearly a quarter of Malaysia's parliamentary constituencies - 53 out of a total of 222 wards - contain plantations operated by Malay voters under the Felda scheme.

In the last general election, Barisan Nasional lost the support of 27 constituencies with Felda plantations - the rural Malay heartland that used to be strongholds of the former ruling coalition.

The new Pakatan Harapan administration has struggled to retain the crucial Malay vote since winning the May election, suffering several losses in recent by-elections. Political analysts say this Felda bailout may prove to be an opportunity for Pakatan Harapan to win back support.