Tun Mahathir described the growth in trade and investment between the two countries in recent years as meteoric, the Bernama report said, with more opportunities expected to be generated in the areas of tourism, science and technology and cultural exchanges.

Dr Mahathir's comments were carried in a message on a souvenir book published by the Malaysia-China Friendship Association, better known as PPMC, to mark the 45th anniversary of diplomatic ties.

He said the bilateral partnership had grown from one that was forged between governments to China today becoming Malaysia's biggest trade partner.

"China's astonishing growth in the last few decades that catapulted it to become the world's second biggest economy had contributed much to its extensive presence not only in Malaysia but in other parts of the world," he wrote in the message.

"Our co-operation has grown at various levels and sectors. I believe apart from the roles played by government and political leaders, the various associations and non-governmental organisations from both nations, including PPMC, have contributed much to the strong and positive state of affairs enjoyed by both our countries," he said.

Dr Mahathir paid tribute to the efforts of PPMC in elevating the friendship between both countries, recalling that he had witnessed the signing of the memorandum of understanding between PPMC and the China-Malaysia Friendship Association in Beijing in June 1993 during one of his official visits to China. 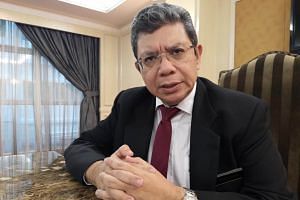 Malaysia says it is keen for more 'fair' deals with China

He said the partnership between both countries had remained constant through the years despite leadership changes because both nations strived to be good neighbours and had adhered to the principle of non-interference in each other's internal affairs.

"I have always believed in the principle of 'prosper thy neighbour' and as China prospered, it has in turn prospered Malaysia as well," he added.

Dr Mahathir also said that Malaysia had given its support to China's Belt and Road Initiative as it saw the benefits as being mutually shared and distributed. Malaysia also saw the project as a continuation of the ancient trade between both countries, he said.