The Malaysian air force has said that the low maintenance rate of its Russian fighter jets was partly due to a lack of sufficient operating funds, Malaysiakini news site reported on Friday (Aug 3).

The Royal Malaysian Air Force (RMAF) was responding to a statement made by Defence Minister Mohamad Sabu in Parliament on Tuesday (July 31) that only four of the 18 Sukhoi Su-30 fighter jets bought by the previous administration in 2007 could fly, with the rest sent in for repairs.

The minister's statement had led to questions in Malaysia over the reason for the state of affairs.

The RMAF said in a statement quoted by Malaysiakini: "From 2007, the yearly operating spending accorded to the RMAF was on average lower and insufficient compared to the amount requested for by the RMAF, based on what is needed to manage and organise the entire RMAF operating assets.

"This was acknowledged by the National Audit Department in its 2017 audit".

The air force did not say what was the amount it had sought from the Barisan Nasional government that was ousted in the May general election.

"This directly restrained the maintenance spending needed to maintain all the logistical support needed for operating 18 Su-30MKM jets," the RMAF said. 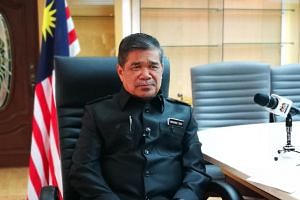 "This has forced RMAF to carry out conservative maintenance repairs on the jets based on the received operating budget, leading to the poor rate of repairs."

The air force said the poor rate of repairs was also caused by the fact that the aircraft must undergo mandatory maintenance repairs after 10 years.

"But the cost of the proposal (by the original equipment manufacturer, OEM) was too high and beyond the RMAF's budget… In addition, the maintenance repairs required the jets to be sent to the OEM's premises in Russia, which would have involved even higher cost and time."

This had forced the air force to loook for an alternative solution.

It said it had decided to carry out the necessary maintenance works within Malaysia, using RMAF expertise, a local maintenance repair organisation and other "local industry players", Malaysiakini quoted the statement as saying.

The air force said a study it conducted on one of the jets showed the maintenance works could be carried out within in the country and at lower cost.

"The RMAF is confident the method can set mandatory 10-year maintenance repairs at an affordable cost for the government. Even so, studying and developing this took time," it said

While this was happening, 12 jets had reached the 10-year age where they must undergo compulsory maintenan repairs.