SHAH ALAM - Malaysia’s former premier Mahathir Mohamad is the opposition coalition’s choice for Prime Minister if it wins in the country’s next general election, expected to be held within months.

Pakatan Harapan made the announcement at its convention on Sunday (Jan 7), reported the Malay Mail Online.

According to an agreement signed by leaders of all four of Pakatan’s component parties on Saturday, Tun Mahathir, 92, must give up the position to jailed opposition leader Anwar Ibrahim, once Anwar is released from prison and given a royal pardon.

Anwar, currently serving a five-year sentence for sodomy, is due to be released from prison on June 8, the Prisons Department director-general said on Sunday, barring any intervention from higher authorities.

He cannot run for political office for five years after his release, unless he is pardoned by the King.

Pakatan’s announcement comes after disagreement within the pact, chiefly from Anwar’s Parti Keadilan Rakyat (PKR), over the candidate for the post, and criticism from ruling party Umno that the opposition was in disarray.

Anwar, a former deputy prime minister and finance minister, was sacked in 1998 by then prime minister Dr Mahathir, when they were both leaders in Umno. The sacking sparked street demonstrations and gave birth to Anwar’s opposition movement Keadilan. In 1999, Anwar was imprisoned for the first time for sodomy, charges he maintained were politically-motivated.

Both men put aside their differences in 2016, when Dr Mahathir left Umno to form Parti Pribumi Bersatu Malaysia after disagreements with current premier Najib Razak over the funds misappropriation scandal at state-owned 1Malaysia Development Bhd.

Veteran activists who have supported Anwar in the last two decades and recall Dr Mahathir’s tough crackdowns on the opposition during his authoritarian rule from 1981 to 2003 have objected to his candidacy as Malaysia’s seventh prime minister. Dr Mahathir stands to become the world’s oldest leader if the opposition wins, reported newswire agency Reuters.

According to unnamed sources quoted by news site The Malaysian Insight, PKR had set three conditions for Dr Mahathir to be named the coalition candidate for prime minister.

These were for Anwar to be made prime minister within a year of Pakatan winning the election, for PKR to be allocated the highest number of seats to contest the election and for Dr Mahathir to agree to institutional reforms.

The news site also reported that a group of Anwar supporters had picketed outside the convention centre on Sunday morning, expressing their wish for Anwar to be nominated as the candidate for prime minister.

In a speech read out by his daughter Nurul Izzah Anwar at the convention on Sunday, Anwar said that he would accept the decision of Pakatan’s presidential council. 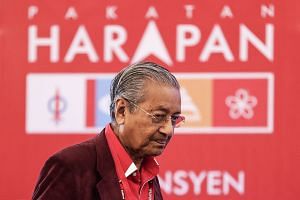 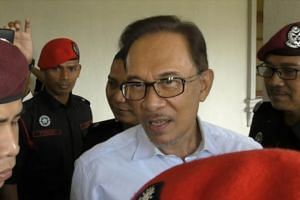 “I urge my friends to focus on the principles of the struggle we started a decade ago,” Anwar said, as reported by TMI.

“This is the main point that must be explained to Malaysians. In the spirit of cooperation and working together, we accept the decisions of the leadership,” he said.

Meanwhile secretary-general of Democratic Action Party (DAP) Lim Guan Eng said in his speech that the opposition must be united to defeat ruling coalition Barisan Nasional in the upcoming election.

“I would like to thank friends from PKR, Amanah and DAP that are ready to set aside their personal feelings from the past to accept our former enemies with an open heart to fight against the country’s enemy, which is BN,” said Mr Lim, who is also chief minister of Penang.

On Sunday, Pakatan also announced parliamentary seat allocations for its component parties in the election.

PKR will contest in the lion’s share of seats – 51 of 165 seats in Peninsular Malaysia plus an undisclosed number of seats in Sabah, Sarawak and Labuan, which have 57 parliamentary constituencies in total.

Of the seats in Peninsular Malaysia, Pribumi has been allocated 52 seats, DAP has 35 seats while Parti Amanah Negara has 27 seats.