It was the first time that the two men met face-to-face in 18 years.

Dr Mahathir was seen shaking hands with Datuk Seri Anwar, his former Deputy Prime Minister whom he sacked in 1998 and later accused him of sodomy.

Anwar’s wife, PKR president Datuk Seri Dr Wan Azizah Wan Ismail, said in a tweet that the meeting between the two was their first since Sept 2, 1998.

Not confirming if he was making peace with his arch nemesis, Dr Mahathir said he was at the High Court as he was interested in the court case initiated by Anwar.

“This is about the NSC Act. As you know, I have written about the Act in my blog and he is doing the same thing - trying to stop the Act.

“So I met him and had a long chat with him about what he’s doing,” Dr Mahathir told reporters outside the courtroom.

He declined to say if he and Anwar were now friends or opposition partners.

“I don’t know about friends. I talked to him, that’s it. I endorse his actions against the NSC Act,” said Dr Mahathir. 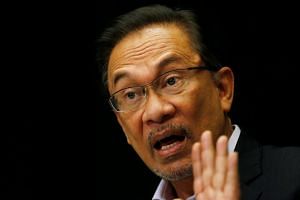 Anwar had filed the suit on Aug 2 to stop the operation of the National Security Council Act on the grounds that the Act is unconstitutional.

He named the Government and the National Security Council as respondents in his originating summons filed at the High Court civil registry.

The Act has been criticised by the opposition and human rights organisations on the grounds that it would give the Prime Minister absolute powers.

It allows for the  establishment of a National Security Council consisting of the Prime Minister as chairman, Deputy Prime Minister as deputy chairman, the Defence, Home and Communications and Multimedia ministers, Chief Secretary to the Government, Chief of Defence Forces, and Inspector-General of Police.

Under the new law:

- the Prime Minister is empowered to declare an area a security area for six months at a time;

- the NSC may then direct the deployment of any security forces or any other government entities to the area;

- the Director of Operations may order the exclusion/evacuation/resettlement of persons and failure to obey may result in, if convicted, a fine not exceeding RM5,000 (S$1,681) or jail for a term not exceeding three years or both; and

- without a warrant, security forces can stop and search any individual, vehicle, vessel, aircraft in the security area if they suspect there is any article of being evidence of the commission of an offence; and enter and search any premise or place if they suspect that any evidence of the commission of an offence is likely to be found on the premises, and may seize any article so found.