"Extremism will spread, unfortunately. I see things getting worse in the future," Dr Mahathir told ABS-CBN News on Thursday (March 7).

"The reason is very simple," he said. "We refuse to acknowledge the cause."

Dr Mahathir, who is on a two-day official visit to the Philippines, sees militants continuing to exploit poor, isolated communities that are most vulnerable to radical conversion.

Governments would have to pursue a less conventional approach, he said.

"We have to identify the cause, try and deal with the cause, and eliminate the cause... Ignoring the cause and trying to fight extremism as if it is a conventional war, you're not going to succeed," he added.

Previous Philippine administrations have pursued an all-out war with Muslim rebels in the country's restive south. 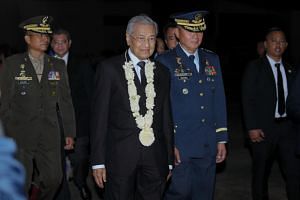 Mindanao autonomy deal - will it work?

Dr Mahathir said efforts now to carve out a new, self-administered region for Muslims in Mindanao, in hopes of ending the decades-long secessionist war, are a step in the right direction.

Mindanao, the Philippines' most underdeveloped region, is home to most of its nickel mines and biggest fruit farms, besides vast tracts of land that the government wants to convert into oil palm plantations.

About five million Muslims live on the island, which is the size of South Korea.

Its notorious clan wars, lawlessness and conflicts with Muslim and communist rebel groups, though, have kept investors at bay.

In February, over 1.5 million Muslims voted overwhelmingly in favour of a law, signed by President Rodrigo Duterte in July 2018, to create an autonomous region in Mindanao.

The Bangsamoro, or nation of Moros, will replace an existing autonomous region with a larger, better-funded and more powerful entity.

It covers parts of Mindanao and a chain of dozens of small islands to the west notorious for piracy and banditry. Three-fourths of the tax take will go to the region. Some US$1.3 billion (S$1.76 billion) in annual grant is expected to aid development.

Although many powers will be devolved, including control of the budget, the central government will keep control of security.

Malaysia mediated in these negotiations.

Its leaders and supporters are widely expected to participate in elections and take the helm of the Bangsamoro government.

"Peace will always bring about opportunities... In the case of Mindanao, when it is at peace, it is now able to make use of opportunities to grow that part of the Philippines," said Dr Mahathir.

"When the economy is doing well, the tendency towards violence would be much reduced."

Most belong to smaller formations like the Abu Sayyaf Group, which has capitalised on decades of instability in Mindanao to generate tens of millions of dollars from piracy and ransom payments.

In a demonstration of the scale of the trouble they can cause, about 1,000 militants, augmented by recruits from Malaysia, stormed and took control of half of the southern Islamic city of Marawi in May 2017 for five months.

It became the Philippines' biggest security crisis in years.

By the time the fighting ended, more than 1,100 mostly militants were dead and nearly half a million people were displaced from their homes.

In January, at least 20 people were killed and dozens injured when two bombs exploded at a Roman Catholic cathedral in the mainly Muslim province of Sulu, also in Mindanao.

Security officials said it was a suicide attack carried out by an Indonesian couple, with help from local militants.