KUALA LUMPUR (BLOOMBERG) - Malaysia's youth are likely to get more power after backing 93-year-old Mahathir Mohamad to topple a regime that ruled the South-east Asian nation for six decades.

Malaysia is "very serious" about reducing the voting age to 18 before the next elections due by 2023, Youth and Sports Minister Syed Saddiq Syed Abdul Rahman, 25, told Bloomberg in an interview in Kuala Lumpur.

The two-month-old cabinet plans to ask the Attorney-General's office to look into what laws need to be amended, he said.

Lowering the voting age to 18 from 21 would add an additional 3.7 million voters, Saddiq said, increasing the number of registered voters by about 25 per cent from the election in May.

Voters aged 21-39 make up around 40 per cent of the Malaysian electorate, twice the number of voters over 60, according to Election Commission data.

"That means the youth voter block becomes bigger and stronger, and therefore, they cannot be sidelined in the Malaysian political scene anymore," said Saddiq, a member of Mahathir's political party and Malaysia's youngest-ever cabinet minister.

High youth unemployment proved to be a critical factor in a vote that ousted former premier Najib Razak, who championed economic policies favouring the Malay majority and now finds himself facing charges in a corruption probe at state fund 1Malaysia Development Berhad (1MDB).

Najib, who denies wrongdoing, had made a last-ditch effort to woo younger voters on the eve of the vote, pledging income tax exemptions for those aged 26 years and below.

Unemployment among Malaysians aged 15 to 24 stood at 10.8 per cent last year, World Bank data show. That is more than three times the national rate of 3.3 per cent.

Joblessness among local graduates meanwhile increased more sharply than non-graduates since 2011, according to data from the central bank.

"The youth care about two primary issues," Saddiq said. "One is about bread and butter issues, which is cost of living, affordable housing, good employment opportunities, and quality of life," he said. The second is getting their voice heard in the nation-building process, he said.

"Power should be returned back to the people," he said. "That means opening up more democratic spaces, which means more young people can join and speak up."

About 75 per cent of younger voters backed the opposition, according to Ibrahim Suffian, the executive director of pollster Merdeka Centre, which tracks voter sentiments.

The Merdeka Centre estimated a voter turnout of about 81 per cent for youths, with urban areas of Kuala Lumpur and Selangor seeing more young people outpace their elders in casting ballots.

"Young voters are the true kingmakers in the elections - they were the ones who brought us into government," Saddiq said. "But also a word of caution, they could also be the ones who take us out from government, because they are not loyal to any political party."

Saddiq, who has pledged to reshuffle youth associations to make sure they are led by people under the age of 35, also wants to phase out political appointees in sports and give more attention to student programs that involve coding, automation, and artificial intelligence. 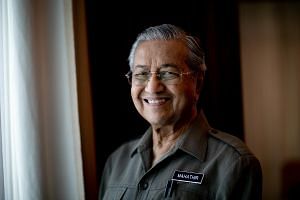 Time for Singapore and Malaysia to discard old stereotypes

Jho Low reached out to Dr Mathathir over 1MDB after he became PM: Report

Reducing the voting age will help break the "youth glass ceiling" and encourage young people to be more active in political organisations, Saddiq said. Still, it's not going to be smooth sailing.

In April, Saddiq was called a "greenhorn kitten" by Hishammuddin Hussein, who at the time was vice president of the ruling United Malays National Organisation (Umno).

"Almost everything I do, including what I wear, will be scrutinised," Saddiq said. "But I don't see that as a liability. While the limelight can crush a person, that limelight can also be translated into positive vibes and energy. If we succeed, we will set a new precedent that appointing young ministers is not bad."

Mahathir has asked him why young people show up late for appointments and always play with their phones during meetings, Saddiq said.

"It's not about politics, it's a lot more about a relationship between a son to a father," he said. "Or a son to the grandfather."